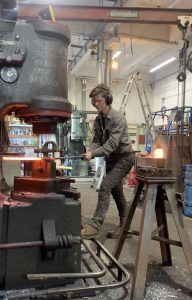 Artistry in the kitchen, even for a simple frittata, goes far beyond knowing when or if to add a pinch of sea salt. Taking it from the top, for the discerning, the choice of skillet makes an incalculable difference.

Blacksmith Annie Arthur (right) leads the division of forged steel cookware at Robert Thomas Iron Design located in the old Navy Yard in North Charleston. Occupying what was originally the facility’s tool and die shop, her base of operations has recently doubled and now takes up 10,000 sq.ft. Annie and her team, which engaged 4-6 assistants, have produced about 12” skillets over the past 24 months. Also, since about a year ago, they’ve made about 1000 14″ dual-handled oval roasting pans.

They are in their busy pre-holiday season. The cookware Annie and her team create forged ironware are largely designed by Robert Thomas, founder of Robert Thomas Iron Design, and Isaac Morton of Smithey Ironware, the Charleston manufacturer known for its cast iron work. The difference between cast iron and  forged steel? Casting iron involves melting iron and pouring it into a mold. Forging steel involves the blacksmith in heating the steel to a malleable state and then using a hammer, anvil, and a variety of other tools to create the final form.

The design must optimize beauty and function in size, shape and weight.

“If it doesn’t do its job, it’s not worth it. If it can’t be used, it’s just sculpture.” Annie said.
Developing a design is demanding. “Sketching in iron” produces many rejected scraps before a final design is decided. An important variable is weight. “Keep it light so that it can be handled well, but thick enough that it won’t warp when it’s heated.”

Once the steel cookware pieces are finished at Robert Thomas Iron Design, they are delivered with a tumbled, shiny polished raw steel surface for a multi- stepped seasoning treatment at the Smithey Ironware, then packaged and shipped for distribution.

The two firms have a thriving partnership and with increased experience and skill, Annie is increasingly contributing her design ideas as new items are added to the product line for future manufacture.“Annie is spectacular,” Robert says without hesitation about this employee whose enthusiasm about her trade is boundless.

How did she get into this field? Annie says she was a horrible, rebellious student at the private Christian high school she attended near her home on  Lookout Mountain, Georgia.

“I thought I would not go to college and be a starving artist,” she recalls. 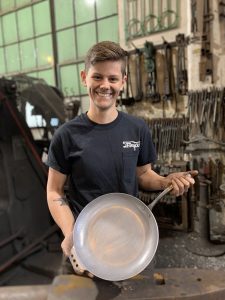 However, that plan turned out to be mostly cooking, little money and no art.  So, Annie decided she would go to college.  When she told her parents her thought was to major in blacksmithing, they said she had to try the field out before they would pay the application fee.
“My mother is an interior designer, and they weren’t against the idea of blacksmithing, they just wanted me to have a solid plan.”

She went along with their condition, took some lessons from a woman who had a blacksmithing business in Lookout Mountain, Georgia.  Her parents were convinced. Annie enrolled at the American College of Building Arts (ACBA.) She excelled at the architectural trades and academic courses like math and science.  She graduated in 2017 as Valedictorian.

She moved to Charleston for college and now the city is home. In rare free hours, Annie goes to the warehouse studio and makes tongs and other  tools for her own use or for her friends like fire place tools, bottle openers and end tables..  She’s also made a small, simply ornamented garden gate for her parents, who continue to be proud of her work and the way she found a satisfying career that suits her so well.

Follow us
Related Topics:Annie ArthurRobert Thomas Iron Design
Up Next