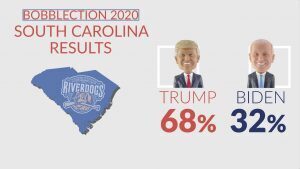 For the second-straight Bobblection, the fans have selected Donald J. Trump as the candidate of choice, winning the RiverDogs Bobblection 2020.

“The Lowcountry picked Trump again,” said GM Dave Echols. “We’d be happy to invite (President Trump) out to the ballpark to toss a first pitch next season to recognize such a great victory.”

“It’s always great when the fans can have fun with us,” said Echols. “Politics are so often a hot topic, but it’s nice that so many people ‘get it’ and were able to have fun with it this year especially.”

The Bobblection takes place every four years, with Charleston voters choosing between Presidential candidates. Four years ago, in a bit of a surprise, the Trump bobbles were selected over Hillary Clinton. Sure enough, they correctly reflected the then-upcoming 2016 election results.

In a new twist this year, the RiverDogs opened the Bobblection to nationwide voting, in honor of the popularity of mail-in ballots. Votes came in as bobbles went out to states around the country.

The nation will soon find out if the RiverDogs and their fans have predicted the correct winner yet again. Election Day in America in November 3rd. Don’t forget to vote.