Editor’s Note – Holy City Sinner was offered the chance to review Borat Subsequent Moviefilm, the sequel to Sacha Baron Cohen’s 2006 Borat mockumentry, as it was scheduled to be shown this weekend at a Charleston movie theater. Unfortunately, those plans were canceled, but we decided to share our review anyway. Very nice!

Although the local screening is no longer happening, the movie still has some tie-ins to the Palmetto State as portions were filmed in the Upstate. 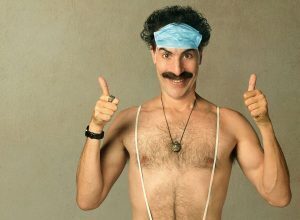 Borat is back, and it turns out that he’s both the hero we need and the hero we deserve in 2020.

Imprisoned since the finale of the film’s 2006 predecessor, Borat (once again played by Sacha Baron Cohen) is ordered by a leery Kazakhstani government official to deliver a gift to Vice President Michael Pence. And that’s just the premise.

Of course, most of us recognize Borat now, and would thus be less likely to get duped by his trickery. In order to keep fooling unsuspecting Americans, Borat brings with him not only an assortment of new disguises, but also an entirely new character: His teenage daughter, Tutar. Tutar is played by Maria Bakalova, a 24-year-old actress who recently graduated from a film school in Bulgaria. Bakalova handles quite a bit of the heavy lifting throughout, delivering a performance equal to Baron Cohen’s when acting alongside him, and really shining in the scenes she leads herself. You’ve almost certainly never heard of her before this movie, but you’re definitely going to see more of her after this.

The stars’ performances are just as outrageous and lewd as in the original –– but the most shocking lines are usually those that were unscripted. With only the slightest provocation, the real people on the receiving end of the actors’ deadpan antics respond with jaw-droppingly inappropriate behavior (Thankfully, no South Carolinian frat boys were targeted this time around…although other residents were).

But not everyone fails the test. There’s the kindly elderly women who responds to an appallingly anti-semitic costume worn by Baron Cohen with nothing but pure love; the log cabin-dwelling rednecks who blame the Clintons for creating the coronavirus, but push back against Borat’s misogyny; and most of all, there’s Jeanise Jones – a matronly babysitter who takes Tutar under her wing, patiently responding to her antics with such grace and wisdom I found myself longing for the opportunity to be on the receiving end of one of her pep talks. Seriously, someone please give this woman a humanitarian award.

The film’s zenith involves a bombshell moment with Rudy Giuliani that quickly took over this week’s headlines. Though the scene certainly delivered, it felt like low-hanging fruit to target the most “baitable” member of President Trump’s circle. I mean, we’re talking about a man who hardly needs an invitation to do or say something questionable in front of a camera.

If you liked the first Borat movie, you will enjoy the sequel. It packs the same punches as the original, but with a topical spin that is at the same time entertaining, horrifying, and a little therapeutic. Those who can’t stomach vulgarity, on the other hand, should absolutely steer clear. You can watch the movie now on Amazon Prime Video. The trailer can be seen below.
–