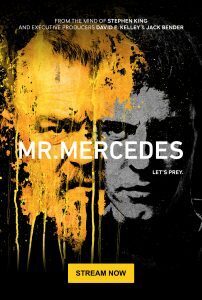 Mr. Mercedes, a television series based on a best-selling Stephen King novel of the same name, is now streaming on NBC’s Peacock service. All three seasons of the series were filmed in the Charleston area.


The series premiered on Audience in 2017, but the network was discontinued in May of this year. The show was developed by Emmy winner David E. Kelley (Boston Legal, Ally McBeal, The Practice) and stars Brendan Gleeson (Into the Storm) and Harry Treadaway (Penny Dreadful). Other actors that appeared in the series include Holland Taylor, Bruce Dern, Mary-Louise Parker, Kate Mulgrew, Ann Cusack, Justine Lupe, Jharrel Jerome, Breeda Wool, Brett Gelman. and Kelly Lynch.

Mr. Mercedes centers on a demented killer who taunts retired police detective Bill Hodges with information about a mass murder involving a stolen Mercedes. The novel was published in June 2014 and promptly moved to the top of the New York Times best-seller list. It won the Edgar Award for best novel.

Plenty of Charlestonians appeared on screen as a local casting company helped get many locals included in the series as extras.

Click here for more info on streaming with Peacock.

City of Charleston Seeking Volunteers to Assist at Warming Center