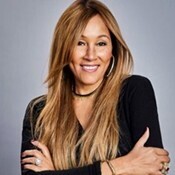 For the better part of two decades Cynthia Garrett set forth on a path in Hollywood. One that began on MTV, VH1, and late night on NBC, eventually becoming a sought after host for the networks on many red carpet events. While she was making a name for herself, the California native who graduated from USC Law School and the prestigious Oxford University knew there was a higher calling for her.

“I always sensed there was something bigger in store for me. I had deep communion with God at a very early age, and I knew He had a bigger plan in mind. I knew it wouldn’t look like anyone else’s. The calling became stronger for me in my early 20’s. I started to listen to Christian speakers like Joyce Meyer and others on CBN. Many of those pioneering female Christian leaders helped lay the groundwork for my future ministry.”

Although she enjoyed her time as a so called celebrity interviewer, Garrett admits walking away from the Hollywood limelight and establishing her own ministry was heaven sent. “This is my true calling, impacting lives for Him. Hollywood became less fulfilling to me. It had no allure.”

Her current weekly series ‘The Sessions’ can be found on several video formats including her YouTube channel, Garrett’s website https://www.cynthiagarrett.org/
and https://www.lightsource.com/ministry/the-sessions-w-cynthia-garrett/love-841988.html

If it’s fair to say everyone’s life is an open book, than Garrett’s wild roller coaster of a ride was front and center in her 2016 memoir ‘Prodigal Daughter : A Journey Home To Identity’. In it she revealed how she was sexually abused as a child, raped during her teenage years, suffered in a bad marriage that led to divorce resulting in jail time, struggled as a single mom, and to cap it all off she survived cancer. Garrett says until the release of the book, only her inner circle new her plight. 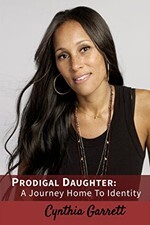 “People who actually knew me and are close to me were aware of my past, but those who followed me on social media or on television may not have been aware the trials and tribulations I suffered. I find my testimony surprises many people. And when they discover all I went through, sexual abuse, cancer, and divorce, I always say, ‘for me it’s just God’. I walked through the fire so I could be a witness for His son Jesus Christ.”

While her 2020 follow up book ‘I Choose Victory : Moving From Victim to Victor’ recounts some of her experiences in ‘Prodigal Daughter’, the new release is more about taking control of your life with God’s help, even when life has dealt you a bad hand. She says the book has garnered favorable reviews.

“It’s been received really really well. I’ve got tremendous feedback since the book came out. I love hearing from people who said they’ve made a breakthrough in dealing with something challenging in their life, especially from those with a certain mindset.”

Garrett admits she extends empathy and sympathy in ‘I Choose Victory’. “I feel sad for those who live in this world, yet don’t want to take responsibility for their lives. They are quite comfortable with the blame game. ‘I Choose Victory’ is all about forgiveness. It’s about allowing God to take control of your life, and gain victory through His strength, and His promises.” The book references several Bible passages. “God has an answer for every situation we face. Choosing to forgive using God’s strength sets you free to do His will in your life.”

One her many positive messages in the new book is about looking forward, and not in the rear view mirror. “I do my best to follow my advice every day. If I’m getting up, if God has given me another day to face the world, than why walk in depression. The world throws enough gloom and doom at you, it’s how you approach every situation that allows you to be a victor.”

Having walked through many fires herself, Garrett understands the victim mentality. “Most people don’t choose to be a victim. It’s not something you aspire too. But in the same vein, most people don’t know how to be the victor. My book is a personal journey through my own eyes. I don’t walk in anger or blame. I chose to forgive. It’s not easy, but with Christ you can do all things.”

She goes on to say, “Whether you’re a Christian or not, there is never any reason to let situations and circumstances control your life. I choose to forgive and let go. I like to say ‘just end it now’. That frame of mind is very freeing, and again it’s all about a walk with God. If you want to experience ultimate freedom, ultimate forgiveness, which leads to ultimate joy, you must start with Jesus.”

Why do so many people succumb to the negative rather than the positive. “Because it’s easy. Becoming the victim is the easier road to take. They don’t know what to do. They don’t know Jesus. They get caught up in a routine. The world will tell them they have to be afraid.”

Garrett adds people often get trapped repeating vicious cycles. “Most times they spiral out of control, becoming locked into a place where they are looking for something or someone, but they aren’t sure what that is. They’re not aware they are in search of hope, but that hope, the true hope only comes when they seek God, and the salvation He provides through Jesus Christ.” 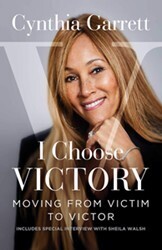 ‘I Choose Victory’ breaks down common barriers, which Barrett calls ‘war zones’. She commits to personal, political, and spiritual areas of life that effect all of us. “I can speak out on this, because it’s been the reality of my life. I have battled in all of these zones. ‘I Choose Victory’ is very personal to me. Having been raped, sexually abused, and dealing with cancer, I had to ask myself ‘how would I deal with it’.”

Only by choosing to be the victor Garrett said she set herself free. “Would it break me. Would it hold me back in my personal and business life. If I choose to be a victim, the answer would be yes, but I chose to deal with it, to rise above and ultimately let God through Jesus Christ set me on a better path. One that brings glory to Him. My personal testimony and my approach helped establish the basis for my ministry, which I’m certain God had planned all along.”

She understands what’s taking place in the world and America today can be overwhelming, and acknowledges many look to put the year of the mask to bed quickly. “Like you, I do believe people will try to erase 2020 from their memory. It reminds me of a hotel elevator that doesn’t list the 13th floor. It says 14 but you know you’re on the 13th floor. We just don’t want to think about it.”

Garrett adds, “It’s not just COVID, but all that is happening in the world. With the protests and the political climate it looks very dim in America in right now. Sadly there is a lot of un-truths bouncing around out there. Even more sad is some in the news media try to pretty it up, but it’s not possible. The world’s truth is a lie. As Christians we know the ultimate truth, and the only answers come from God.”

‘I Choose Victory’ may not present as a self help book, but it is an honest account from a woman who has walked through fire and refuses to carry the charred remains with her. Garrett’s book offers hope for readers of all ages, all ethnicities, both male and female.

While she hasn’t put pen to paper, Garrett hints her next book could talk about freedom from our sin, a sort of spiritual cleansing. “My next book might deal with purity. It’s something we have to get back too. Purity of the body, mind, and spirit. We don’t value purity anymore in America, nor do we around the world. We’ve lost purity in ourselves, our relationships, and with our bodies. It’s time to come clean.”

For now she’s relishing in God’s work, promoting ‘I Choose Victory’ and loving every minute of her ministry. “I am in a good place in my life. I have a strong family, strong support from my friends, and I feel I have been truly blessed by God to carry out His purpose through my ministry.”

Some parts of her ministry bring her even more joy. “I’m especially fond of Girl Club. It’s a weekly webinar hosted by me and other women offering spiritual advice, on matters that are important to women and young girls. We talk about real issues, like relationships, marriage, divorce, and sex.” She jokingly adds, “I call it a not ready for primetime ministry, because the topics run the gamut.”

While it’s a talk show, Garrett offers up another variation. “Yes we talk, but I prefer to call it a ‘walk show’, because many of us have walked through fires, and we can offer followers real faith answers to the problems, and concerns they are facing. It’s not only a real faith based show for Christian women, but for all women seeking hope in their lives.”

Garrett says if you’re trying to draw a parallel to ‘Girl Club’ it’s easy. “It’s everything ‘The View’ is not. No matter what the topic, we approach it by looking through the lens of faith. I know we are making a difference in peoples lives.” While the show is re-broadcast on several Christian viral formats, it originates 11am Fridays on the west coast and airs in the UK and SA. Find out more by visiting https://www.cynthiagarrett.org/#homedup