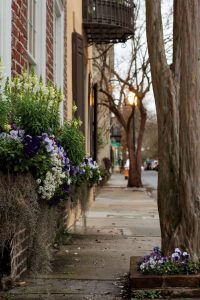 The Preservation Society of Charleston is releasing five virtual house tours of historically and architecturally significant homes in Charleston. The virtual tours will be narrated by the Preservation Society of Charleston’s Executive Director, Kristopher King, and will include photographs; primary source maps; and commentary from other contractors, architects, and preservationists edited into the house tour footage. The five virtual tours will publish every two weeks beginning Sunday, October 18th, in conjunction with The Fall Tours, and will be available for purchase for a limited time only.

SC Humanities supported this program with a Mini Grant. The five virtual tours will feature the following properties:

1 Water Street – Located one block west of the Battery on the Charleston peninsula, this house is a unique example of the Italianate style. The tour includes discussion of its notable architectural features, the challenges of its siting in a high flood area, and the details of its historic house raising project.

43 Legare – An example of a 1750s Charleston single house, this is one of the largest pre-Revolutionary houses in the city. During the tour, Kristopher King takes viewers through the interior of the house and explains the typical layout of a single house, the alterations that occurred over time, and the details of the restoration of the house.

173 Broad Street – This historically significant 1873 house is built on land reclaimed from the Chisholm Rice Millpond. Destroyed by the disastrous fire of 1861, this section of Broad Street wasn’t rebuilt until after the Civil War. The property has been in the same family for four generations.

89 East Bay – Located on the famed Rainbow Row on Charleston’s East Bay Street, this house, built in 1787, is notable for its ornamental ironwork, heart pine floors, and original mantels and woodworking. The 20th century effort to save and restore the group of wharf-side buildings, today known as Rainbow Row, is an important part of this house’s history.

5 East Battery – This hard hat virtual tour walks viewers through an in-process multi-year restoration of one of Charleston’s most visible houses on High Battery. It is known colloquially as The Pink House for its notable paint color but historically it is called the John Ravenel House.

Virtual tours are available to purchase for a limited time only. For more information on the virtual house tours and to purchase, visit vimeo.com/ondemand/pscvirtualtours or call 843-405-1050.

Founded in 1920, the Preservation Society of Charleston is the oldest grassroots preservation organization in the nation. The Society serves as a strong advocacy leader for citizens concerned about preserving Charleston’s distinctive character, quality of life, and diverse neighborhoods.
–