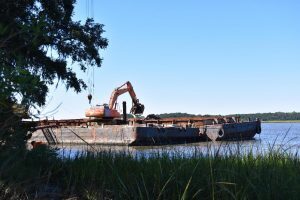 The Charleston Museum is pleased to announce the launch of its Battery Pringle revetment renovation project. This project is being funded by the National Park Service, specifically, the Disaster Grant Program of the Historic Preservation Fund.

Battery Pringle, also known as Fort Pringle, is one of four Civil War batteries maintained by the Museum on its Dill Sanctuary. Listed on the National Historic Register, Battery Pringle, located on the Stono River, is considered one of the best preserved examples of Confederate earthworks in the southeast.

In 1995, the fortification’s west face on the Stono was suffering from tidal erosion and the Museum worked with the U.S. Army Corps of Engineers and the Charleston Soil and Water Conservation District to install a protective stone rip rap barrier to forestall further deterioration. The rip rap incurred damage due to Hurricane Irma in 2017 and some of the stone had settled, exposing a geotextile fabric underneath. The current project will not only correct this damage but will improve the barrier, further protecting this important historical resource.

Through a selection process, the National Park Service provided grants to sites on the National Historic Register that suffered damage from Hurricane Irma.

“The Museum is committed to preserving the natural and cultural resources on the Dill Sanctuary and Battery Pringle is a significant part of its history,” Carl Borick, Director of The Charleston Museum, said. “We are grateful to the National Park Service for their critical assistance which has allowed this project to move forward and ensure the long-term protection of this landmark. We also extend thanks to the Corps of Engineers for their partnership in protecting the site for over two decades, the South Carolina Department of Archives and History for processing the grant request and administration of the grant funds, and our contractors, G. Robert George and Associates and Cape Romain Contractors, for their diligence in this work.”

Work on the battery will begin in mid-September and the project is scheduled to conclude by mid-December.