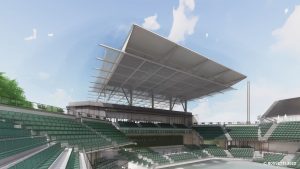 Charleston Tennis LLC, the parent company of the Volvo Car Stadium, Volvo Car Open, and LTP Daniel Island, today announced plans, in partnership with the City of Charleston, to renovate and modernize the Volvo Car Stadium. The 20-year-old city owned facility will undergo extensive upgrades to enhance the stadium experience for patrons, performers, and event management. The company believes these changes will allow the stadium to attract world-class athletes and performers to Daniel Island. The renovations will be funded by Ben and Kelly Navarro, the owners of Charleston Tennis LLC, as a gift to the City of Charleston.

“I first fell in love with the tennis tournament on Daniel Island in 2004, when I attended with my four young kids,” Ben Navarro said. “I remember that we only had four seats in the stadium back then so my youngest daughter would sit on my lap. Fifteen years later I found myself at the Kenny Chesney concert realizing it was the best concert of my life. I knew at that moment that we had to do something special with the stadium. We’ve come up with a plan that maintains its intimacy while also modernizing the facility. We are excited to be working with the city to re-imagine Volvo Car Stadium and create an exceptional space for locals and visitors to experience world-class entertainment in Charleston.”

The new plan features a multi-story “Stage House” that will house player wellness facilities including premium locker rooms, physical therapy and exercise space, as well as back of house media and production and food preparation areas, plus a VIP Club level overlooking Center Court. This building will serve as the foundation for a new permanent canopy structure that will provide south side shade for tennis fans and critical stage infrastructure and weather protection for musical and theatrical performances. 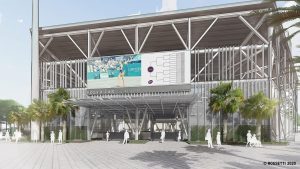 Other changes include an overall refresh of the façade and concourse, enclosing the corners of the upper tier to create a more intimate bowl atmosphere; new premium hospitality suites, increasing permanent bathrooms by 130 percent, upgrades to the concession offerings, IT and architectural lighting as well as the construction of an elevated boardwalk underneath the stadium’s Grand Oaks that will protect their root system but allow for patron’s to enjoy new programming under the tree’s vast canopies.

“Ben and Kelly Navarro’s donation to fund the renovation of the Volvo Car Stadium on Daniel Island is just the latest in a long list of examples of their generosity and unwavering support of the Charleston community,” Charleston mayor John Tecklenburg said. “This renovation will dramatically enhance the experience of both players and visitors, draw in world-class performances and inspire local young athletes who are coming up through the ranks. On behalf of the citizens of Charleston, I’d like to extend my deepest gratitude to the Navarro family for this remarkable gift, and I look forward to getting started.”

Construction will begin after final city approvals, with an anticipated project completion in the fall of 2021. For the 2021 tournament, which will take place April 3-11, the Volvo Car Open will construct a temporary stadium on its current Althea Gibson Club Court. The temporary stadium will provide seating for up to 3,000 fans per session and create an intimate atmosphere to host world-class tennis.

The nine-day Volvo Car Open is the largest women’s-only tennis tournament in North America. The event attracts an average of 90,000 attendees and more than 100 of the top singles and doubles tennis players to Charleston every year. Tickets for the 2021 tournament will go on sale to the general public on November 13. Patrons have the option to choose from individual tickets and ticket packages. For more information on the tournament and ticket options, visit volvocaropen.com or call 843.856.7900. 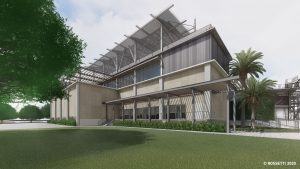 Follow us
Related Topics:Charleston Tennis LLCCity of Charlestonvolvo car stadium
Up Next