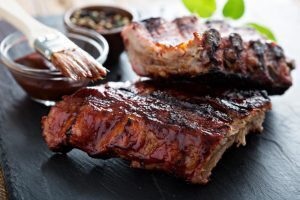 If you enjoy cooking out, you know the importance of having a quality grill. When the season comes back around, consider replacing your normal grill with a reverse flow smoker.

It’s easy to use so even those who are new to cooking out won’t have problems making delicious BBQ. Due to the way the smoker is designed, you’ll also never have to worry about having dry, tasteless meat ever again.

Does this sound good to you? Check out this guide to learn more about what a reverse flow smoker is and how it can create some of the best BBQ you’ve ever eaten.

What is a Reverse Flow Smoker?

A reverse flow smoker works by forcing the hot smoke under a metal plate called a baffle and then pushing it back through the main cooking chamber.

This process helps distribute heat through the cooker more evenly so your meat doesn’t become overcooked or undercooked. The plate also acts as a handy grease trap.

Every single barbeque smoker has hot spots. The difference is that the metal plate found inside the reverse flow smoker allows for a lot fewer of them.

The heat is more evenly distributed so you won’t have some areas of the meat that are burned and some that are still raw.

The plate that rests under the cooking chamber acts as a handy grease trap which makes for easy cleaning but that’s not the only benefit that it brings to the table.

When the grease drips on the tray it creates steam. As the steam rises back into the cooking chamber it moisturizes the meat and helps lock-in flavor.

You won’t have to bother with a second tray filled with water to control the temperature inside the smoker and stop the meat from drying out.

One thing that every newbie griller struggles with is temperature spikes. With a reverse smoker, the metal plate heats before the cooking chamber does.

So, if you lose control of the fire, you’ll have a chance to cool things down before the hot smoke reaches the food you’re cooking.

You can’t cook meat on a smoker without opening up the lid at some point. The problem is that you let a bunch of the hot air out. With standard smokers, it will take a while for the temperature to build back up.

Thanks to the metal plate, the temperature inside a reverse smoker goes back to normal pretty fast after you open up the lid.

Get the Best BBQ with a Reverse Flow Smoker

If you want to have evenly cooked meats that pack tons of flavor, you should pick up a reverse flow smoker before the next grilling season. It has a ton of helpful features that will allow you to make the best BBQ every single time.

Are you looking for even more tasty cooking methods? Check out the food & bev section of our blog daily for all the latest tips.

Tips On How To Improve Your Lifestyle