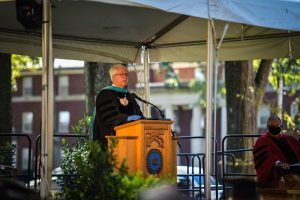 Graduates from Presbyterian College’s Class of 2020 filed out of Neville Hall on the PC campus, all wearing masks. They made their way to the West Plaza, where friends and loved ones, professors, and staff members wore masks too and sat in chairs arranged 6 feet apart.

“While these masks cover our smiles,” the Rev. Racquel Gill, PC’s Assistant Chaplain, said, “they can never conceal our joy.”

Commencement Weekend came five months later for the Class of 2020. More than half of the graduates returned to campus to enjoy their special day that was originally scheduled for May 9.

“A world that desperately needs you”

“This year’s graduation is unusual, but it doesn’t make it any less special,” PC President Bob Staton said as he welcomed everyone to the ceremony. “In fact, I would argue it makes it more special and memorable.”

President Staton shared wise words with the graduates. He also passed along personal observations, saying that those with live “meaningful and impactful lives” are ones who rely on their faith to sustain them, are guided by a clear set of values, and never give up.

“Many of these learnings are captured in PC’s motto, ‘While we Live we Serve,’” Staton said. “I encourage you, as you embark on the next chapter of your life, to go out and serve and inspire the world by your actions.”

Staton urged the graduates to never give up on their dreams and never “let the world change you or pull you down.” Instead, he asked the students to “go out and make a positive difference in the lives of others.

“While we find ourselves in turbulent and uncertain times,” Staton said, “we have stayed true to our mission and have held steadfast in our commitment to preparing you to be successful in a world that desperately needs you.”

Staton, who is retiring at the end of the year, told everyone the welcome address was his final one at PC.

“While it has some sadness, the job and blessings of having you as a part of our lives over the last 5-plus years far outweighs the sadness,” Staton said. “Each of you has enriched and changed our lives and that will go forward with us in the days and years ahead. So we thank you.”

Dr. Clint Harshaw, who was named PC’s Professor of the Year in the spring, spoke about how his Commencement speech would have been different had he delivered it five months earlier.

“I’d tell some funny stories about you when you were freshmen, brag about how mature you have all become, and talk about looking forward to the start of another beautiful summer in South Carolina,” he said.

Harshaw said he would have motivated the graduates to prepare for the next chapter in their lives, a chapter full of interviews and the first day on the job or in graduate school.

“But 2020 interrupted my plans and your plans too,” he said. “To say it’s been tough for us all is a gross understatement.”

Harshaw spoke about the challenges facing the world today, including the pandemic, social unrest, and distrust of political leaders.

“Our collective mental health has suffered,” Harshaw said. “Members of the public no longer show patience with and kindness for others. Selfishness and inconsiderate behavior rule the day. We are spectators to countless outbursts and freakouts.”

But, amid the upheaval in the world, Harshaw said that Commencement was a cause for celebration. He shared a story about how his economics professor left a lasting impression when he opened a class with a quote from Ralph Waldo Emerson: “This time, like all times, is a very good one, if we but know what to do with it.”

Harshaw urged the graduates to “make joyful noise” as they celebrated graduating from PC.

“Among all of the classes of graduates of this institution, your class is both distinctive and extraordinary,” he said. “No other class before yours has been through what you have experienced — in your senior year, no less.

“I know the future is now in good hands, and you have the support and confidence of all of the Presbyterian College family.”

“Control what you can control”

“One stark difference . . . is that we are now at different places in our lives,” Montague said to her classmates.

Montague, who graduated with a B.S. in accounting and a B.A. in political science, spoke to the Class of 2020 about change and control.

“Nobody likes feeling like the decisions they make are inconsequential,” she said. “This is, I think, part of the why this pandemic has been such a world-rocking experience.

“Many people have been forced to come to the realization that we may have less say in our own lives than we would like to admit. Or as my father puts so pithy and pragmatically, ‘You can only control what you can control.’

“This mindset is one that we will be forced to wrestle with throughout the rest of our lives.”

Montague said that, at PC, students could study for a test but may not make the grade they wanted. Or student-athletes could spend lots of time in the gym, but still not get the starting position they wanted.