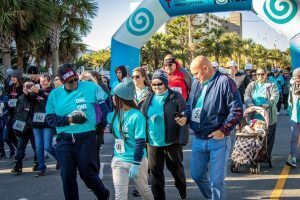 Eleanor Hardy first saw the incredibly sad toll of lung cancer when she worked for the MUSC Hollings Cancer Center Lung Cancer Clinical Trial Program. Since then, she has met several people who have been impacted by this devastating disease. Between now and November 14th, Hardy and her team are planning to walk and run 1,000 miles to raise $1,000 as a part of the American Lung Association’s LUNG FORCE Run/Walk.

When Hardy was a clinical trial coordinator at Hollings Cancer Center, she got to know many lung cancer patients and their families. Her work inspired her to go back to school to become a physician assistant.

“I was overwhelmed with inspiration as I watched patients and their families persist through their battle and for some, was fortunate to witness their years extended,” said Hardy. “While those days allowed me to head home with a smile and feeling of fulfillment, there were also the days of defeat, loss and sadness. The days when patients were out of options, and I watched families experience true heartbreak. Because of the latter, research and lung health awareness are more important than ever.”

Four years ago, she was introduced to the LUNG FORCE Run/Walk, which helps raise awareness for lung cancer and funds for research. Each year, she participates in the event in memory of someone who lost their battle with lung cancer.

“My first year as a team captain I ran in honor of a man known endearingly as LR 0065, who showed optimism and humor throughout his own battle and inspired me to incorporate joy into all aspects of my life. He lit up a room, wrote weekly emails that left me laughing and handled his battle with grace and wit,” she said.

Last year, she ran in honor of her dear friend’s father who she was fortunate enough to meet during his courageous battle with lung cancer. This year, she will run in honor of “Coach.”

“He (Coach) gave advice unlike anyone else knowing exactly what to say even if it wasn’t what you wanted to hear. I witnessed him change so many young boys and inspire them to become respectable young men, spending hours talking with them and understanding them rather than simply reprimanding them,” said Hardy. “He motivated and inspired me more than he knows. I owe a lot of where I’ve landed and what I’ve become in my time since living in Charleston to him. The world needs more of him.”

Since the event is virtual this year, Hardy has recruited team members from all over the U.S. to participate. They started their run/walk on September 1 and strive to collectively hit 1,000 miles and raise $1,000 by the virtual LUNG FORCE Run/Walk on November 14.

Battery to Face Charlotte in First Round of USL Championship Playoffs