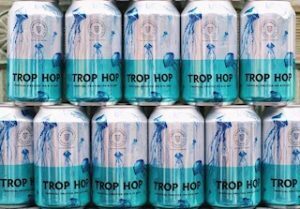 Holy City Sinner recently caught up with Southern Charm’s Austen Kroll at Uptown Social to chat about the can release of his beer, a tropical-infused IPA called Trop Hop.


If you’re afraid of IPA, don’t run away just yet. Kroll emphasizes this IPA is friendlier to sensitive palettes.

“It’s very dialed back,” he explained. “I wanted it to have some ABV to it, but with the body of a session.”

In other words, this does the job of your standard IPA in terms of alcohol content – it’s packing a 6.1% ABV – but without the bitter taste you might expect.  In brewing terms, it contains a measured IBU (or International Bitterness Units) of 55, which is fairly mid-range in regards to  bitterness.

If you, like me, have been drinking a lot of seltzers lately, this is an easy segue back into beer. The taste is light and refreshing, with notes of passionfruit and grapefruit. You won’t feel bloated after drinking a pint of it.

When Kroll initially launched King’s Calling Brew Company in 2019, its signature beer could only be found on tap around Charleston in bars Kroll refers to as ‘heavy hitters’ (like Uptown Social and The Dispensary). With the rollout of smaller kegs, he’s expanded to places like Blind Tiger, Rutledge Cab Company, and Mex 1 Coastal Cantina. But Kroll says his primary focus now is on can distribution, which began this summer.

Happy New Years y’all! We’ll be producing a small batch of cans available in Charleston this spring!! Don’t worry, your resolutions will be long gone by then

Now on shelves at all 22 Charleston-area Harris Teeters, six-packs are ready to pick up just in time for the start of football season. And, of course, in time for the premiere of the latest season of Southern Charm.

But Kroll wants this venture to be separate from his reality TV gig. “If the show were to end tomorrow,” he said, “I’ll have my own company.”

His foray into brewing was much more than an effort to take advantage of the exposure he gets from the show. He studied entrepreneurship in college, and before launching his own label, Kroll spent several years working in the beer industry. Despite the years of experience, though, he’s well aware there are skeptics out there. And he’s ready to prove himself.

“People in Charleston are welcoming, but also can be very wary,” he said. “They’ll think, is this Southern Charm guy trying to make a kitschy beer and slap Bravo on the label? That’s why none of the logo or description has anything to do with it.”

South Carolina’s brewing laws make it tricky to distribute beer across the country, so out-of-staters won’t be able to find it in their local grocery stores just yet. Right now, Kroll’s focus is getting it on shelves across South Carolina, with launches in North Carolina and Georgia happening in the near future, and more to come after that. In the meantime, fans across the country can shop Trop Hop swag over on their website.