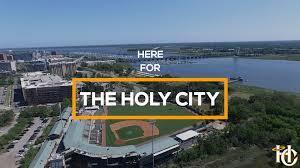 The Charleston RiverDogs were awarded a Golden Bobblehead Award—the top honor for creativity in Minor League Baseball—for the “Here for the Holy City” campaign. The award comes as recognition for Best Digital Campaign or Activation, and was announced at Minor League Baseball’s annual Innovators Summit on Wednesday.

The #Here4HC slogan has been prominent across the team’s social media channels amidst the COVID-19 shutdown. The efforts were built around local outreach but found recognition with nationwide reach. Videos and photos came in from pillars of the local and state level, as well as stars of the television and film screens with ties to Charleston showing their love and support for the Holy City.

While the team was unable to play any games in the season, the staff ramped up engagement around the Lowcountry.

“We put love into action in the community,” said Chris Singleton, the RiverDogs Director of Community Outreach.

The team had weekly meals for MUSC Health’s frontline workers, donated emergency meal kits to those in need, and renovated a youth baseball field. The organization also created platforms to recognize our Holy City Heroes, including health care employees and local military veterans in partnership with Boeing.

The team was also able to host camps for the local youth, with several baseball camps, and for the first time, a kid’s culinary camp. This ramped-up camp schedule saw over 400 local children involved with the club over the summer.

The Innovators Summit (formerly known as the Promotional Seminar) is an annual event for the industry, held in different host cities each year. Due to the issues in 2020, this year’s event moved from Winston-Salem, NC, to being held online. Teams were still able to connect via video conferencing over the two-day event.

This is the first time since 2012 that the team has received the trophy. The RiverDogs previously won for hosting a home run derby on the deck of the USS Yorktown, taking home Best Non-Game Day Event, as well as the Best Overall Promotion.

The award submission video can be seen below.
–