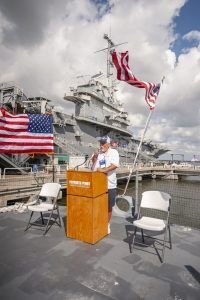 On Monday, October 5th, at 10 am, veterans of the historic Navy destroyer USS Laffey will stream their annual memorial service live on the Patriots Point Naval & Maritime Museum Facebook page.

The service will honor former crewmembers who have died in the past year, and the 32 sailors who were killed while serving aboard the Laffey during a fierce World War III attack Apr. 16, 1945, off the coast of Okinawa, Japan.

The memorial service is usually open to the public, but this year will be limited to just Laffey veterans and their families because of COVID-19 safety measures.

“It’s very important that we continue to honor our Laffey crewmembers,” said Laffey Association President Chris Kirhagis. “The virus will keep the community from physically joining us, but through technology, we hope to reach even more people than before. The ability to stream video will give folks across the world a chance to join us aboard the Ship That Would Not Die.”

A Sumner-class destroyer, the USS Laffey DD-724 served in the U.S. Navy from 1944-1975 and has been a part of Patriots Point Naval & Maritime Museum since 1981. The live-streamed service will begin at 10 am on October 5th at www.facebook.com/patriotspoint.org.