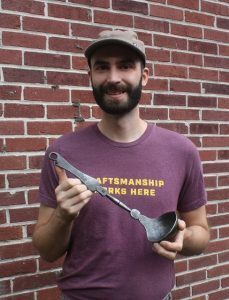 Sharing his love of crafting beautiful objects for daily use is metalsmith Addison de Lisle’s interest in teaching others to gain and perfect the skills to make things for themselves.

Not that it’s easy. Addison says the first two challenges for novices are accepting that the first efforts may not be perfect.  “You have to accept that some things will have to be discarded.”  Then, there’s the challenge of working with fire.  “You learn how to protect yourself.  You stay alert and maintain safety. Then, it’s fun.”  These measures include hearing protection, gloves, as well as knowing how and where to stand when working with metal and fire.  These techniques have been mastered over thousands of years of metalworking history.

As a Professor of Blacksmithing at the American College of Building Arts (ACBA) in Charleston, Addison teaches enrolled degree candidates.  He also is the instructor for one of the ACBA public programs – Forged and Filed Cookware – coming up January 4-7.

Addison’s approach combines his passion for metal artistry and an interest in contemporary technologies such 3-D printing. For example, he might print the handle components for a knife, then mount them to a traditionally hand-forged steel blade he’s shaped on the anvil.

His upcoming public course is focused on ornamented kitchenware, and involves learning to visualize the desired outcome and pulling out a spatula or ladle from a bar of steel. Students take on the challenge to create an object that is functional, aesthetically pleasing, and feels balanced in the hand.  In his own studio, Addison also makes beautiful objets d’art. A recent piece is a wind-up “toy” made of silver; an idea that engaged his interest in the challenge of incorporating mechanical components into his work.

Positive and gregarious, Addison’s conversation is punctuated by quirky stories that reveal how satisfying his life as an artist is turning out to be. He describes, for example, how he became interested in metalsmithing. Having graduated from high school in Maine, where he grew up, he was set to go to college to study environmental science.

But, his financial package fell apart. “My father enrolled us both in a metalsmithing class at a local art college, basically to cheer me up,” recalls Addison.  His father created an oyster knife that he still uses and his son awakened to an interest in metalwork that has become his career.  Addison went on to earn a BFA from the Maine College of Art and an MFA from the Southern Illinois University Carbondale.  He feels fortunate to have apprenticed for several years with a master blacksmith Douglas E. Wilson, and is an alumnus of the Fondation de Coubertin Fellowship in France.

How did he get to Charleston?

“It’s a funny story,” says Addison. While assisting with a fund-raising auction at a craft center in North Carolina he happened to sit down to lunch with Kerri Harding; a bookbinder, conservator and restorer of rare books.  The two were soon engaged and married in 2018.  Kerri was already living in Charleston, so Addison moved to what has become the couple’s hometown. Addison set up a studio and, beyond his greatest expectations, was hired by ACBA as an instructor and then full-time professor.  The remarkable objects he creates are on view on his website: https://www.addisondelisle.com.

His enthusiasm for art, teaching and life and general can be experienced by participating in the upcoming class.

Beginners are welcome, and more experienced smiths will be challenged to make a project of greater complexity. (Limited to eight participants, sign up now.)

Follow us
Related Topics:Addison de LisleAmerican College of Building Arts
Up Next