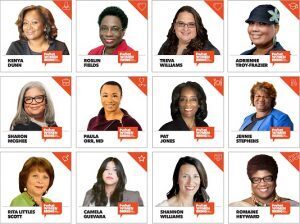 At YWCA Greater Charleston’s third annual What Women Bring event on October 1st, heralded by empowering music and eagerly awaited by an audience of all ages, genders, and races, 12 of South Carolina’s top women leaders will take the virtual stage, representing excellence in 11 industries.

To be introduced by event emcee Octavia Mitchell, Charleston’s Emmy award-winning WCBD News 2 TV anchor, the women will candidly field questions from the audience, with topics ranging from gender bias, the gender wage gap, the glass ceiling, succeeding as a woman of color, health disparities, and the 100-year anniversary of women’s right to vote, among others.

This year, the honorees include:

Business honoree Kenya Dunn, founder and chief executive officer of The Power-Filled Woman. A former vice president at T-Mobile, Dunn was one of the few female executives in her company, an advocate for diversity and inclusion, a mentor to multiple women, and an inspiration for many. “For many black women like me, she blazed a path showing us we can make a difference by working hard, being fully ourselves, and empowering others,” writes one. Today, as the CEO of her own firm, she concentrates her efforts on coaching women for success.

Community honoree Roslin Fields, founder and executive director of Youth Empowerment Services. Fields is a former middle school educator who saw the struggles of some of her female students, including low self-esteem, low motivation, and poor decision-making, all stemming from backgrounds that did not teach them their worth. She began to mentor them—but realizing this wasn’t enough, she founded a nonprofit focused on facilitating after-school programs in low-income middle schools and putting on the Annual Dreams Conference.

Community honoree Treva Williams, lead organizer of the Charleston Area Justice Ministry (CAJM). Williams came to Charleston to lead CAJM before the organization—a network of faith-based congregations working together to empower marginalized people—even had a name. In her work she has helped to reduce the achievement gap in public education, diminish juvenile detention, enable accessible recourse for those who experience wage theft, and motivate the City of Charleston to take concrete steps to address racial bias in its policing.

Education honoree Adrienne Troy-Frazier, executive director of Berkeley County First Steps. A champion for young children and their families, Troy-Frazier is always seeking ways to improve the lives of vulnerable young children, families, and mothers-to-be in Berkeley County. She has initiated top-quality programs including providing a doula to young women in the most rural and needy areas, offering a community health worker to Spanish-speaking families with SC PASOs, and bringing diverse people together for dinners to tackle critical, sensitive topics affecting children.

Government honoree Sharon Middleton McGhee, minority & women SBA coordinator at the Charleston County Aviation Authority. McGhee believes in helping people discover their purpose, grow, and succeed. In her professional role, she enjoys forming partnerships with minority and women entrepreneurs, ensuring they have an equal, fair opportunity to attain economic success. She is also the president of SLMM Enterprises, LLC, where she helps small businesses, an adjunct professor for the College of Charleston, and serves as a board member, speaker, and panelist for multiple organizations and events.

Healthcare honoree Paula Orr, MD, physician and owner of Charleston Women’s Wellness Center. Honored by Essence magazine as one its “gynecologists we love,” this founder of a 20-year-old preventative and alternative health practice for women has served women not only as patients, but in the community through her volunteer work. Dr. Orr currently serves as president of the Charleston, SC alumnae chapter of The Links, Inc., is the former president of Jack & Jill of America, and was the only woman and African American to serve on the MUSC Board of Trustees.

Hospitality honoree Pat Jones, general manager of Carowinds. The leader of a large regional firm that has experienced tremendous growth and success, Jones has exceeded goals, led multi-million-dollar projects, made bold investments, and inspired her employees to enjoy their jobs while ensuring that every one of their guests has fun. In four decades, she has gone from working as a high school game attendant at her local amusement park to leading Carowinds to the largest growth in its history.

Law honoree Jennie Stephens, chief executive officer of the Center for Heirs Property Preservation. Since Stephens as hired as the founding director of nonprofit Center for Heirs Property Preservation, more than 226 title issues have been resolved on family land, with a total tax-assessed value of $13.6 million: more than those who hired her had dreamed possible. She has empowered countless African American families and women across coastal South Carolina to fight to maintain their family lands, and has served on the front lines of the battle to eliminate economic discrimination.

Media honoree Rita Littles Scott, vice president and general manager (retired) of WCSC Live 5 TV. Littles Scott began her broadcast career in North Carolina, Cleveland, and Chicago before coming to Charleston’s CBS station, WCSC. In five years she was named the station’s general manager: the first female to be so named in Charleston. During her tenure WCSC held the number one spot in ratings and revenue. In 2011, under her leadership, it launched Bounce Around Charleston, the first over-the-air news show for the black community.

Rising star honoree Camela Guevara, independent artist and art director for the Carolina Youth Action Project. Guevara, a fiber artist and painter, creates intuitive gouache paintings as well as handmade monuments to unsung labor. Her work has been exhibited at the Greenville Center for Creative Arts, North Charleston City Hall, Virago Gallery, and Redux Contemporary Art Center. She shares her passion for fiber art by teaching embroidery and mending, and is currently working on creating a handmade wardrobe to reduce dependency on fast fashion.

Technology honoree Shannon Williams, vice president of sales and marketing at BoomTown!. In her highly visible role at BoomTown!, Williams doesn’t just drive revenue, sales, and the go-to-market strategy of the firm, she is also a driving force behind its culture. She’s passionate about creating an environment where all team members thrive; in fact, she was nominated by women she inspired while holding leadership roles at Blackbaud and Amazon. Williams gives back to the community too, serving as a speaker on industry panels and other events like Women in Tech, and is board president for Operation Home.

The Arts honoree Romaine Heyward, operations and booking manager for the Dock Street Theatre. Heyward began her career in journalism and public relations, but switched gears to enter the event planning field, first for The Gaillard and then for the MOJA Arts Festival and Happy New Year Charleston. Today she helps to manage more than 150 performances each year at the historic Dock Street Theatre, from chamber music and drama to musicals and lectures. She also serves on the boards of Charleston’s Dress for Success and its Black Expo.

Individuals from across South Carolina and the US can attend this year’s virtual What Women Bring event at no charge.

Follow us
Related Topics:What Women BringYWCA of Charleston
Up Next