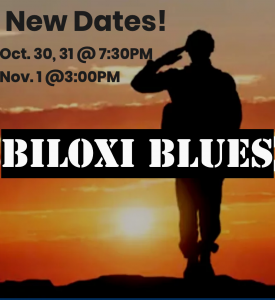 The South of Broadway Theatre Company (SOBTC) is rebooting Biloxi Blues with appropriate social-distancing and sanitizing guidelines in their Park Circle space. They are offering three limited-seating performances on Friday, October 30th at 7:30 pm, Saturday, October 31st at 7:30 pm, and Sunday, November 1st at 3 pm.

Tickets are $30 for adults and $20 for students. All previous ticket holders will receive advance access to seats. Since the seating will be socially-distanced between parties, no seating map or ticket sales are available online, and tickets will not be sold at the door. Click here for more information.

Combining 1940s nostalgia, an appreciation for military service, and a coming-of-age comedy, Neil Simon’s classic play Biloxi Blues will be a collaborative production with South of Broadway Theatre Company and The Citadel Fine Arts Program. Biloxi Blues tells the story of young Army recruit Eugene Morris Jerome as he travels from Brooklyn to Biloxi, Mississippi for boot camp during World War II. On his quest to find love, achieve fame, and attain his manhood, Eugene is joined by a diverse band of multi-talented recruits, an old-school drill instructor, an enterprising prostitute, and a local girl who might just be the one.

This new production is directed by The Citadel alumnus Bob Luke ‘76. Luke runs a successful acting studio in New York City and has enjoyed an illustrious career as an on-set acting coach for Hollywood movies including Ransom, Racing Stripes, and Enchanted. The lead role of Eugene will be played by local actor Evan Fondren whose recent work includes The Righteous Gemstones, Titus Andronicus, and Macbeth. The role of Eugene’s drill instructor, Sgt. Merwin J. Toomey, will be played by former Army drill instructor and Citadel Director of Cadet Activities Arthur Rich, SFC/USA (Retired). Citadel cadet Erich McPhail, a History major/Fine Arts minor, will play recruit Roy Selridge; other members of the platoon will be played by local actors Brandon Lee Bullock  (Joseph Wykowski), Chase Graham (Don Carney), and Trey Thompson (Arnold Epstein.) SOBTC actress and model Caroline Scruggs will play the role of Daisy and the role of Rowena will be played by Madelyn Smallwood.  Additional cast members include Citadel cadet Jesse Quimby, a Physics/Math major with a Fine Arts minor.

This production of Biloxi Blues is the result of a new partnership between SOBTC and The Citadel’s Fine Arts Department to provide community performances that support each organization’s mission and core values.

“For nearly two decades, we have worked to uplift our community through the performing arts,” said SOBTC Founding Artistic Director Mary Gould. “We are grateful to The Citadel for the opportunity to take that mission beyond the four walls of our beloved theatre in Park Circle to the wider Charleston audience.”

“There are many parallels between the arts and the military; staging on both of these fronts requires dedication to detail, a diverse team, and a clear directive. The Citadel recognizes that partnerships like ours with SOBTC foster innovative ways to develop the communication skills of our cadets as well as connect with the greater Charleston community, said Tiffany Silverman, Director of Fine Arts at The Citadel.

Follow us
Related Topics:park circlesouth of broadway theatreThe Citadel
Up Next

Jason Isbell, Amanda Shires, and Marcus King Trio to Perform at The Bend