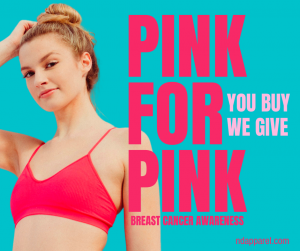 During Breast Cancer Awareness Month, the company is donating a hot pink bralette (The Elli  Azalea) for every purchase of a bralette of the same color. The “Pink for Pink!” campaign has  already begun as company founder, Becky Connelly, said she was eager to get a jump-start on  October.

“My customers say it’s the ONLY bra they’ve been able to wear after radiation treatment,” Connelly said. “It’s seamless and stretchy-soft, with no digging wire or pokey clasps, and has a built-in concealer. I’m excited for it to be a comfy-cozy treat for Hollings to send home with their patients. I want these women to experience the extreme comfort of The Elli Bralette. Immediately!”

Connelly’s stepmother had radiation and chemotherapy following a lumpectomy in her 40’s. Twenty years later, diagnosed with a different type of breast cancer from before, she had a single mastectomy.

“She’s always said how wearing a bra was uncomfortable after receiving radiation treatment – that her skin felt “sunburned,” Connelley said. “And both times after surgery, she desperately wanted a comfortable bra, but was unsure how or where to find it.”

Knowing this, and hearing from her customers about the same thing, Connelly wanted to do something about it.

Hollings Cancer Center is close to Connelly’s heart. Women in her family have been treated there, and she’s been a part of Hollings fundraising efforts for years.

“I’m hoping these bralettes will be included in recovery care packages, alleviating some guess work with regard to the bra situation,” Connelly said. “These women have enough to deal with, I want this bralette to be a relief for them.”