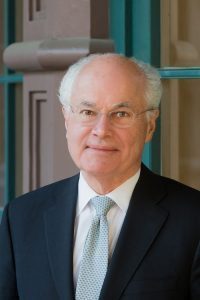 Nigel Redden today announced that in October 2021, he will step down as General Director of Spoleto Festival USA.

“The cancellation of the 2020 Festival and the enforced isolation of the last several months have made me realize that, after nearly 35 years since I first joined Spoleto Festival USA, it is time for me to retire,” Redden said. “The Festival continues to mean an enormous amount to me—my first real job was working as a studente assistente at the Festival of Two Worlds in Spoleto, Italy, starting in 1969. I have no doubt the Festival will continue to thrive, and I will be excited to see how the organization evolves under new leadership.”

Redden continued, “It has been an exciting adventure with many, many highlights. The exploration of Charleston in the exhibition Places with a Past was a revealing and provocative way to view this fascinating city, and Charleston continues to offer an unparalleled festival setting given its beauty and history. Hearing Renee Fleming, Joshua Bell, Alisa Weilerstein, and so many other artists at the beginnings of their careers was thrilling. Watching audiences dedicate their time to The Peony Pavilion—an 18½-hour-long opera sung in Chinese—was a testament to the wonderful public that the Festival attracts. It was a privilege to see productions from the Gate Theatre, Druid, Complicite, Shakespeare’s Globe, Kneehigh, and the Royal Shakespeare Company in the intimacy of Dock Street Theatre. I am especially looking forward to seeing Omar, our commissioned opera from Rhiannon Giddens and Michael Abels that was supposed to premiere this year and will now open our 2021 season.”

Spoleto Festival USA was founded in 1977 as an American counterpart to the annual Festival of Two Worlds in Spoleto Italy. Redden first joined the Festival in 1986 as General Manager. He resigned in 1991, but returned in 1995 after the Festival had suffered significant deficits.

During his tenure, the Festival built endowments; was involved in the renovations of Festival Hall (formerly Memminger Auditorium), Dock Street Theatre, Charleston Gaillard Center, and College of Charleston’s Sottile Theatre; commissioned numerous artists; and staged many world and US premieres.

Redden’s notice provides the Festival more than a year to identify a successor, and the Festival will begin a search immediately.