Several years before she earned a degree in political science from Ouachita Baptist University (2002), Sarah Huckabee Sanders was getting a taste for politics spending her teenage and college years in the governor’s mansion, during her father’s (Mike Huckabee) tenure as governor of Arkansas.

In 2004 she was a field coordinator for President Bush’s re-election campaign, following that up by being the national political director for her dad’s two presidential runs (2008 & ’16). With the writing on the wall Mike Huckabee bowed out early in 2016, encouraging his daughter to climb aboard the Trump Train, allowing Sanders to form a strong bond with the now 45th president of the United States.

Trump realized Sanders was cool under pressure and had a certain southern charm, extending her the position of deputy White House press secretary when he took office in January 2017. Less than six months later she moved up to the full time White House Press Secretary, a role she would hold for more than two years in the Trump administration, before stepping down, a decision she made on her own.

A Fox News contributor and perhaps future politician herself, Sanders released her first book recently appropriately titled ‘Speaking For Myself’ Faith, Freedom, & the Fight of Our Lives Inside the Trump White House.  In over 262 pages complete with personal photos, Sanders provides a candid and compelling account from her brazen teenage years at Central High School in Little Rock, bouts of postpartum, to accompanying President Trump to North Korea. 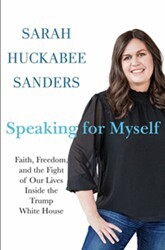 For someone who spent the better part of two decades conveying the messages of Mike Huckabee and Donald Trump, ‘Speaking For Myself’ is a welcome behind the scenes look at what it takes to speak on behalf of high profiles politicians. While the memoir recalls some of Sander’s early years (1990’s), most of the book recounts her time with Trump,

Out from under the daily pressure of the White House, and sometimes grueling 16 hour days, ‘Speaking For Myself’ allows readers an open door into the chaotic world surrounding the presidency, and a lot that takes place at 1600 Pennsylvania Avenue in Washington DC during a 24 news cycle.

Sanders details the highs and lows she was subjected too while serving as press secretary, including being berated by the main stream media for her weight, ridiculed by comedian Michelle Wolf during an annual White House Correspondents’ Dinner, verbally attacked while dining out with her family, and ridiculed by parents at her children’s school. Many stones are overturned in her first ever autobiography.

Although disturbed by all the negative attention, Sanders by her own account maintains a certain genteel charm holding back any retaliation, preferring to take the high road, something instilled in her at an early age, by her father who was a respected Baptist preacher before entering politics. Through her own personal trials Christianity has been the mainstay for Sarah Huckabee Sanders. She admits she’s not perfect, just covered by the grace of God, often enough to hold her tongue.

‘Speaking For Myself’ is both refreshing and easy to read, with the meat of the text covering mid 2017 to mid 2019. Sanders recalls trips to Camp David, New York, China, and South Korea for the Olympics. She gives a detailed description of Air Force One and the West Wing. Sanders recounts the laughter and fast food she enjoyed with fellow staffers, the joy her kids brought to the Oval Office, and many sleep deprived nights.

It appears nothing is off limits in ‘Speaking For Myself’, with a full recollection of a trip to Singapore, and Trump’s historic meeting with North Korean leader Kim Jong-un. Sanders opines on the fake media, the mob, the Brett Cavanaugh hearings, and the ‘witch hunt’ aka Russian collusion.

‘Speaking For Myself’ is not complete without layers of levity. Sanders recounts the time she was pulled over for speeding in a rental car without her license or insurance. Her excuse, she was trying to deliver 30 pies to 2008 presidential candidate Governor Mike Huckabee and action film star Chuck Norris. Apparently the state trooper thought the tale was to preposterous not to be true, adding he let her off and provided escort to the political rally.

A flirtatious moment with Kim Jong-un is one of the more humorous moments in the book, as is the time she got Prince Charles to sign her seat table card during a UK trip. Even more poignant are the stories of Trump interacting with families and kids inside and outside the White House. Suffice to say, whether times were all out stressed, hectic or more carefree, Sanders paints a picture of non-stop activity at the West Wing and during official United States visits abroad.

‘Speaking For Myself’ is not a dark expose’ meant to attack any specific person, group, or President Trump. Just the opposite, the book is an open and honest portrayal in her own words of a faithful daughter, wife, and young mother who for over two years handled one of the toughest positions in the White House, and did with grace and dignity. Whether Sarah Huckabee Sanders will have her own press secretary someday remains to be seen.