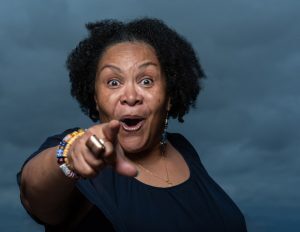 PURE Theater kicks off it’s 18th Season in October with its first virtual play, No Child, written by Obie Award-winner Nilaja Sun and directed by Sharon Graci. The show is presented in partnership with Riverside Theatre in Iowa City, Iowa, and features PURE Core Ensemble member Joy Vandervort-Cobb. The show will be available to be viewed virtually anytime from October 8th through October 22nd.

“Here’s lesson number one: Taking the 6 train, in eighteen minutes, you can go from Fifty-ninth Street, one of the richest congressional districts in the nation, all the way up to Brook Avenue in the Bronx, where Malcolm X High is, one of the poorest congressional districts in the nation. In only eighteen minutes.” In No Child, Nilaja Sun takes us into the halls and classrooms of the fictional Malcolm X High to reveal the complex, multiethnic classroom of students – plus their parents, school administrators, and staff, including the school janitor and security guard – that make up the school’s ecosystem. Though the title is meant to call to mind the infamous act of the Bush administration, Sun’s story is one of the power and resilience of public school educators.

“It’s thrilling to begin Season 18 with a virtual, one-person play,” says Sharon Graci, PURE Theatre’s Artistic Director and the Director of No Child. “PURE has a long history of producing one-person plays. They’re thrilling for both the audience and the performer. In No Child, Joy plays 16 different characters, including multiple students, teachers, and school staff, and she’s just excellent. On top of that, as we launch ourselves into this new way of being PURE, which includes filmed performances of our work, I’m happy we’re starting with a one-person show.”

“We warriors, we live in hope even when everything we see tells us to just give up,“ says Joy Vandervort-Cobb, who is reprising her role from PURE’s 2015 Piccolo Spoleto production. Joy has been a member of PURE’s Core Ensemble for eight years now, and has acted, directed, and taught both locally and nationally.

Nilaja Sun is an actor, playwright and teaching artist most known for No Child, which won an Obie Award, a Lucille Lortel Award, two Outer Critics Circle Awards, two NAACP Theatre Awards, and was named the Best One-Person Show at the U.S. Comedy Arts Festival in Aspen. No Child is based on her experiences teaching the arts in New York City schools, and she has performed the play herself over 700 times worldwide. She is also a film actor, a teacher, and a native of New York’s Lower East Side.

Tickets for No Child are on sale now at puretheatre.org and at the PURE Theatre box office. Tickets start at $15. PURE is asking the ticket buyer to reflect on how many people are watching the production and what they feel comfortable spending. The show is also available through the PURE All-Access flex pass, which provides access to all five plays in the season as well as a multitude of other virtual offerings.

Additional information about No Child and the All-Access Flexpass can be found on PURE’s website at www.puretheatre.org or by calling the box office at 843.723.4444 (available Tuesday through Friday 12:00 pm – 6:00 pm).