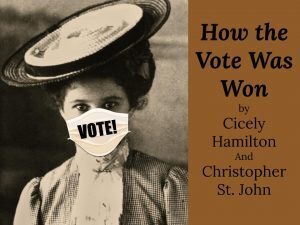 The government has said that women do not need votes as they are all looked after by men…how ridiculous! It’s London, it’s 1918, there’s a dangerous flu spreading, and the country is emerging from a long, difficult war. It’s the perfect time for women to agitate for the vote!

Join the College of Charleston’s Department of Theatre and Dance on October 1st and 2nd as it celebrates women’s voting rights in its season opener, “How The Vote Was Won,” a one-act farce by feminists/suffragettes Cicely Hamilton and Christopher St John. The show is a timely reminder of the challenges faced by women in the struggle for equal voting rights and the importance of every vote counting during the 2020 election and every election. Presented with comedic jabs and sharp wit, the play is an entertaining and family-friendly livestream experience.

After parliament states that women don’t need a political voice because they are all looked after by men, the women leave their jobs and homes and instead insist upon support from their nearest male relatives. Hilarity ensues until the overwhelmed males band together to demand votes for women.

A founding member of the Women Writers’ Suffrage League, Hamilton wrote the story as a satirical pamphlet published by the League in 1908. The pamphlet was an enormous success and prompted her to combine forces with St John to turn it into a play. Since its debut on April 13, 1909 at the Royalty Theater in London, it has become one of the most well-known suffrage plays ever written.

“How the Vote Was Won” is directed by department faculty member Susan Kattwinkel. She notes, “This play is a delightful short farce, and we’ve found it to be a great play to experiment with all our new performance demands, like streaming and social distancing and masks. We decided that instead of trying to work around those changes we’d make them a part of the show. We’ve placed the action of the show in London in 1918. That’s the year that some women won the right to vote in Britain, and it’s also the year of the flu pandemic. So, it’s not only the actors who are wearing masks and social distancing, it’s also the characters. That gave us the opportunity to find all sorts of humorous ways to play with props and movement. We think the result is a fun romp and we hope you’ll join us for our experiment.”

During this challenging time for the arts community the Department of Theatre and Dance continues its season theme, THE SHOW MUST GO ON, with fall productions: dance concert “dance deconstructed,” Sophocles’ “Antigone” adapted by Emily Mann, and student monologues “Our World: Student Voices on 2020.” Tentative production details are listed and updated at theatre.cofc.edu.

Follow us
Related Topics:college of charlestonCollege of Charleston Department of Theatre and Dance
Up Next

Charleston Opera Theater to Host “Opera on the Waterfront” in Mt. Pleasant