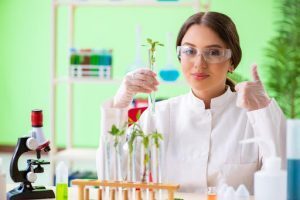 Did you know that the body produces about 90% of serotonin, one of its “happy hormones,” in the digestive tract? Or that a lack of natural serotonin supplies may give way to depression? By contrast, high levels of this hormone may have arousal-decreasing effects.

Serotonin, however, undergoes “decarboxylation” before it becomes serotonin. It’s pretty much the same for dopamine, as it is also a decarboxylated form of another substance. This applies to many other compounds, like amino acids, and yes, even cannabinoids.

What is decarboxylation, though, and why should you care? Is it something that only scientists with well-equipped labs can conduct?

We’ll serve you the answers to all these questions (and more) in this post, so be sure to read on.

The dictionary definition of decarboxylation is “the removal of carboxyl from a molecule.” We can splice up the term in three root words: “de,” “carboxyl,” and “ation.”

The root word “de” in Latin, among many things, means “removal.” “Carboxyl” pertains to organic carboxylic acids that contain a carboxyl group. “Ation,” in turn, is a suffix that denotes “action” or the “process of performing something.”

So, taking all that together, decarboxylation means “the process of removing carboxylic acids.”

It seems that the first use of the term “decarboxylation” occurred between 1935 and 1940. Who used it for the first time is a mystery, but it may have to do with the first-ever crystallization of biotin in 1935. Biotin (Vitamin H), in turn, is a key substance that catalyzes decarboxylation reactions.

In any case, to decarboxylate something means to take away a carboxyl group from a molecule. You can identify molecular carboxyl groups by their “COOH” form.

The C in “COOH” represents a carbon atom. The first “O” means that the C forms a double bond with an oxygen atom. The “OH” then refers to the carbon atom having a bond with a hydroxyl group.

Once you’ve decarboxylated something, it releases the carbon atoms in carbon dioxide form. As such, you can also say that decarboxylation (or “decarb”) is a loss of carbon or CO2.

How Does the Decarboxylation Process Work?

Heat and time are two of the most common elements of decarboxylation. The exact level of heat, as well as the length of time needed, depends on what you want to decarb. In most processes, though, it often starts at a range of 100 to 150 degrees Fahrenheit.

Who Can Carry Out the Decarbing Process?

The term “decarboxylation” may sound very scientific, but you can do it right it home. So long as you have an oven, a baking tray or cookie sheet, and some baking paper, you’re good to go.

You’d want to learn how to decarboxylate if you plan to, say, make your own CBD butter or cook with hemp extracts.

Why Would You Want to Learn How to Decarb?

Well, if you want to make your own “edibles” at home, then knowing how to decarb ensures you get the most of your buds. That’s because cooking cannabis flowers over direct heat can “cook-away” its precious cannabinoids.

For starters, raw cannabis buds don’t have the actual “cannabinoids” in them yet. What they have are the acid forms, referred to as “cannabinoid acids.” For example, a freshly-harvested flower contains CBDa, THCa, CBGa, and other acid-based compounds.

In case you were wondering, the last “a” in the acronyms above stands for “acid.”

Decarboxylation makes these acids more bioavailable by converting them into cannabinoids. So, when you decarb cannabis buds, for instance, you turn the CBDa in it into CBD, the THCa into THC, and the CBGa into CBG.

Doesn’t Smoking or Vaporizing Cause Decarboxylation?

It does! Smoking and vaporizing the buds are the fastest ways to decarb them. However, keep in mind that not a lot of people who want to use cannabis are too keen on smoking it.

Also, as mentioned above, you wouldn’t want to cook raw flowers straight on a stove-top. Really high temperatures can cause the cannabinoids to vaporize away. For instance, THC appears to disappear in temperatures of more than 315 °F.

In addition, cooking raw cannabis can cause it to release a bitter taste. This, in turn, can make your dish taste a bit like ash. At the very least, the food you make with “non-decarbed” cannabis may end up unappetizing.

What Are Some Ways to Successfully Decarb Cannabis?

Make sure that you pre-heat your oven to no more than 245 °Fahrenheit. Otherwise, your buds will start decarbing as soon as you pop it into a still-warming-up oven. In this case, you might end up with “over-cooked” flowers that no longer have any cannabinoids in them.

Another essential step to decarbing is to rotate the buds with a wooden spoon every 10 minutes. This helps prevent the flowers from sticking to the sheet and decarboxylating unevenly. Besides, you only have to do this twice or thrice, as the decarb process just needs 25 to 30 minutes of oven time.

Also, make sure that you use high-quality ingredients. This applies to both the buds and butter (if you’re making cannabutter).

Get Decarbing So You Can Start Making Edibles

There you have it, your guide to answering the question, “what is decarboxylation? As you can see, it’s a simple formula of subtraction, wherein you “take away” carbon from a substance. This substance, in turn, can be cannabis buds, amino acids, and many other compounds.

What’s important is to make sure that you decarb cannabis buds before you cook with them. This way, you can preserve the cannabinoids so you can then incorporate them into your dishes.

Ready for more awesome guides and how-tos like this? Feel free to check out our other news posts then, and don’t forget to follow us on social media!

The Awesome Android 11 Features you need to know