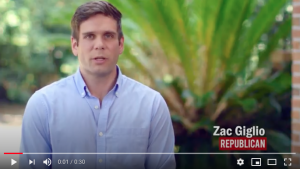 The ad highlights Republican voters who are supporting Rep. Cunningham this year. The ad features: