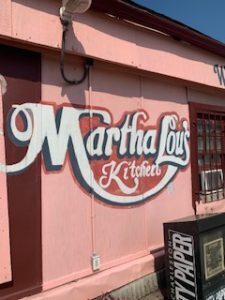 Martha Lou’s Kitchen, the iconic soul food restaurant has closed after 37 years of serving the downtown community – this according to a report from WCBD.

News 2 said the restaurant was sold “due to development in the area.” The Post & Courier’s reporting said the building was owned by Craig Bennett and is scheduled to be demolished.

The popular pink restaurant was known for its fried chicken, lima beans, and so much more. Owner Martha Lou Gadsden, 90, and her business were featured on the Travel Channel and appeared in Bon Appetit, the New York Times, Southern Living, and more.

Melanie Alston, Gadsden’s granddaughter, told The Post & Courier that the family is still offering catering services and are discussing whether they want to reopen the restaurant in another location.

This is a heartbreaking loss for the city and Holy City Sinner will sorely miss this incredible restaurant.

Smithsonian ‘Water/Ways’ Exhibit To Open At Maritime Museum in Georgetown