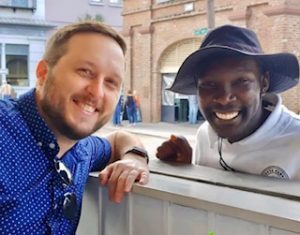 The Charleston Police Department is investigating an alleged assault by two juveniles on local journalist, Quintin Washington of “Quintin’s Close-Ups.”


According to Washington, he was talking on his phone while walking along Market Street Tuesday afternoon when the incident began. Washington said he saw the two aforementioned juveniles riding their bicycles and remarked to his friend that they ought to be in school, which one of them overheard.
“They started following me on their bikes…hurdling negative words at me,” Washington said. “I began filming and that’s when one of them knocked my iPhone out of my hands (see WCBD video below). As I was headed to work, they found big rocks and (threw) those towards me.”

Shortly thereafter, one of the juveniles punched Washington in the face multiple times (click here to see that video, provided by @palmettoben on Instagram), which a bystander caught on video. After another bystander intervened, the two juveniles grabbed their bicycles and left the scene. Washington then contacted the police to file a report.

Washington said he was doing fine after the attack and had no visible or serious injuries.
–