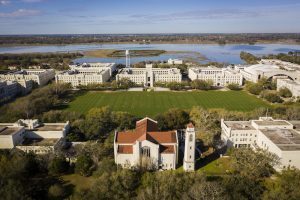 An aerial view of The Citadel in Charleston, South Carolina on Monday, March 9, 2020.
(Photo by Cameron Pollack / The Citadel)

For the 10th consecutive year, The Citadel was ranked the #1 Top Public School in the South offering up to a master’s degree by U.S. News & World Report. The Citadel is ranked #2 overall in the South when private and public institutions are combined.

“Ten straight years of earning the #1 Top Public College in the South position is a singularly distinctive achievement that should be celebrated,” Gen. Glenn M. Walters, USMC (Ret.), president of The Citadel, said. “This ranking is calculated by U.S. News & World Report based on data the college provides annually to the U.S. Department of Education, as well as other data such as alumni giving. This accomplishment is the result of a concentrated effort by countless members of The Citadel family who are dedicated to the mission of developing principled leaders. I applaud our entire campus.”

“This is a rewarding, but not surprising, ranking for those of us who attend and for the many who came before us in the Long Grey Line,” said Cadet Col. Nicholas Piacentini. “Much like alumni frequently confess, I believe attending The Citadel is truly the best choice a student can make. Everyone enters the South Carolina Corps of Cadets as a common person; those same people graduate with an uncommon desire and ability to succeed by applying principled leadership in all professional pursuits.”

You can see the Top Public Schools in the South list here.

Follow us
Related Topics:The Citadelus news and world report
Up Next