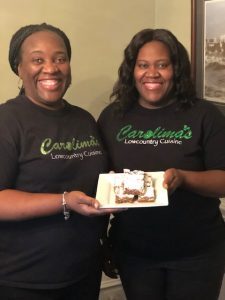 Cooking together as a family is part of her Gullah heritage, says Executive Chef Sameka M. Jenkins. A native of Mt. Pleasant, Her mother and several family members still reside on land owned in the areas of Hamlin, 7-Mile and 6-Mile.
But where her elder family members before her were outstanding cooks, Sameka took the family to a new culinary level when they created Carolima’s in 2012. She established a catering business specializing in Gullah staples and Southern bakery creations that call attention to culinary excellence in general, and most specifically that of Charleston.  One local AirBnB host says she always presents new guests with a box of Carolima’s Charleston Chewies as a way to set the scene for visitors to Mt. Pleasant.
Well known today for those Charleston Chewies, Sameka actually started the business by making savory Lowcountry specials that are as popular as ever today.  These include her infamous Fried Chicken, Charleston Red Rice and Lowcountry Shrimp and Grits.
Completing her early schooling in Mount Pleasant, Sameka earned a Bachelor of Business Administration with a marketing minor at Francis Marion University.  She completed a Master’s degree in HR at Webster University and went to work in a bank. Some time later, she decided to combine her education with her entrepreneurial ambition. Having done all the cooking for friends while in college and beyond, she focused on catering – after all, she was living at the center of the Southern hospitality world. And, she says, “It’s my God given talent.”
Looking for a name that would be memorable, Southern sounding and enticing, Sameka turned to a very generous acquaintance. Suzy Stalker, owner of Vickery’s on Shem Creek and Gene’s Haufbrau, said that “she had been holding three business names and that I could pick one,” recalls Sameka. When she said Carolima’s it sounded perfect and the name was born.
Before long, the business was growing. Sameka’s sister Émma Cromedy, initially a banker, then on staff at a financial company, had become owner/operator of the first mobile dessert truck in Charlotte, NC. She decided to dissolve that business and join her sister in Summerville full time.
Sameka and Émma’s mother, Adell, was glad to have both her daughters near home. She herself, after leaving an Administration job in the X-ray Department at a local hospital, was in the very South Carolina business of weaving sweet grass baskets and earrings.  She earned a living at that craft for 15 years until she recently retired. 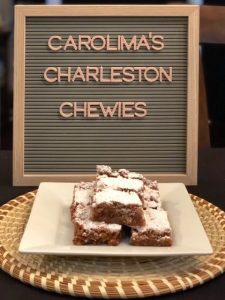 Joining Carolima’s, Émma brought her pastry and baking skills.  Now with her on board as Pastry Chef, Carolima’s flourished with selling even more Charleston Chewies.  These little square confections, known by different names in other parts of the country, as offered by Carolima’s feature a traditional home-tweaked recipe that includes brown sugar and butter, or that same recipe with nuts added.
Sameka was very pleased that Carolima’s could add more desserts to the repertoire. “I grew during a time when you baked a cake from scratch.  You would never think of serving a store-bought cake.  I didn’t want to be preparing everything savory from scratch and then serve customers a store bought cake.”
Customers may purchase Carolima’s Charleston Chewies online to be shipped and – of course – they can also be ordered and picked up locally. Carolima’s also has these specialty bakery items available for local specialty and gift shops and they are expanding to a roster of corporate clients.
You can follow Carolima’s on Facebook & Instagram @Carolimasc. To contact Carolima’s: 843-900-4467; www.Carolimas.com