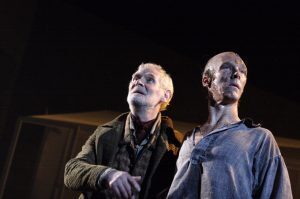 34 West Theater will reopen its downtown venue on October 9th and 10th for the broadcast of the 6-time Tony Award-winning musical Kinky Boots, captured live from London’s West End.
“We couldn’t think of a better way to reopen the theater than with the ultimate feel-good musical of the millennium,” Artistic Director Jeff Querin said. “With social distancing and additional safety measures in place, everyone will feel that much more comfortable.”
34 West, known for producing original plays and musicals written by their actors and designers, also exhibit productions from the National Theatre of London via NTLive.
“Once a month, usually on Sunday, we join our audience for a ‘front row seat’ for whatever’s new in London,” Querin said.
Upcoming broadcasts include FRANKENSTEIN featuring Benedict Cumberbatch (pictured above right) on October 30th and 31st and the largest-ever production of 42ND STREET, November 13th and 14th.
A menu of champagne cocktails, wine, craft beers, sodas and savory snacks are available.
For more information, visit 34west.org.