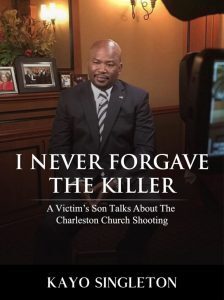 In 2015, Kayo Singleton’s mother, Myra Singleton-Thompson, and eight of her friends were murdered in a mass shooting at the Mother Emanuel AME Church because they were Black. Singleton’s new book, I Never Forgave The Killer, addresses his personal feelings about the murderer, the bail hearing, his FBI interview, and the infamous fast food meal that was given to the murderer at the time of his arrest.

This book also reflects on the grim reality that careers were made off of the church shooting. Singleton shares the love he felt from the City of Charleston and simultaneously his disappointment in the church’s treatment of the three survivors.

A limited release of signed physical copies will be available starting October 9th. Other availability will be announced at a later date.

For more information, to reserve your signed copy, and/or to get information on speaking engagements with Singleton, visit www.myra9.com.

EXCERPT FROM I NEVER FORGAVE THE KILLER by Kayo Singleton – Introduction:

Writing this book gave me an opportunity to document everything I have felt since my mother was murdered. The Charleston Church Shooting was an American homegrown terrorist attack. Nine innocent people lost their lives because they were Black. The killer Dylann Roof, a 20 year old white male, wanted to ignite a race war. Roof self-radicalized from his home computer. Reports have stated that he wasn’t raised with racial hate. Googling his family, I found his mother pictured with a black man who is listed as her husband and boyfriend. Kids sometimes lash out when their parents are not in compliance with their wants and desires. I’m not in the speculation business but it’s hard not to wonder if this is where this problem started.

Forgiveness is a word that’s symbolic with Christianity and many other religions. Sometimes I wonder if the victims’ families from the September 11, 2001 terrorist attack forgave Bin Laden? I heard it loud and clear when former President George W. Bush wasn’t in a forgiving mindset for Sadamm Hussein. Bush made it clear that Hussein was the guy who tried to kill his dad. Turning the other cheek is courageous and worthy of expressing. But for me, murdering nine innocent people inside a Bible study is unforgivable.

Many careers were started and advanced because of The Charleston Church Shooting. Winston Churchill and other politicians have been famously quoted stating never to let a tragedy go to waste. Yes, in life things happen that we have no control over. Business doesn’t stop when a person loses a family member or close friends. Being directly affected by this tragedy I have been in the eye of the storm.

Forgiveness is a gesture that is needed in today’s society. I tried everything in my power to find that emotion within my heart; to find the passion to forgive. But the attempts I made just weren’t sitting right within my spirit. I couldn’t stop thinking about my mother lying in her own blood from being murdered. Killed as she led a Bible study in a church she became a member of at 10 years old. I couldn’t continue to torture myself by searching for something that wasn’t authentic. It wasn’t until I started speaking from my heart that I felt some form of healing. Not forgiving is not a bad thing. It doesn’t mean I’m incapable of forgiveness. It just means, I Refuse To Forgive Dylann Roof.

I forgave the church for it’s mishandling of donated funds. I forgave the church when the survivors of the shooting felt slighted. I became a member of Mother Emanuel when I was 13 years old. All my Sundays as a young boy were spent there and my relationship with the church can be worked out in the future. Murdering my mother and her friends just doesn’t fit the forgiveness pardon from me.

We are now living in a pandemic and tomorrow is undoubtedly not promised. I don’t want history to reflect that it is okay to murder people because of there race or ethnicity. I don’t want my heirs to carry a torch that it’s fine to slaughter because you will be forgiven. That job is ultimately done by the Creator of all living things. History should reflect that all people are created equal. Some are blessed with a smoother start or more privileges than others. But consistency wins the race and within time, everyone gets their blessings. My mother was big on family and it is my job to make sure we are not remembered as victims. We are innovators and creators. Physicians and counselors. Thinkers and leaders who strive to make positive impacts on our communities.