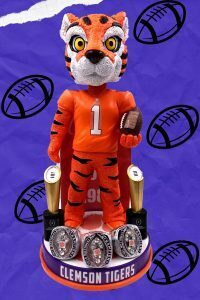 The backing lists the years of Clemson’s titles, which were in 1981, 2016, and 2018. The bobbleheads were produced exclusively for the National Bobblehead Hall of Fame and Museum by FOCO, an official licensee and manufacturer of Clemson Tigers and NCAA merchandise.

The limited-edition bobbleheads are individually numbered to only 2,018 to coincide with the school’s last title year. The bobbleheads are $45 each with a flat-rate shipping charge of $8 per order. They are only available through the Hall of Fame and Museum’s Online Store and are expected to ship in November.