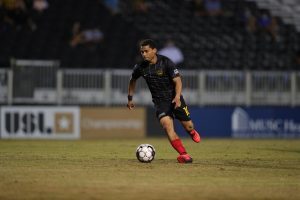 With one of the best first half performances of the season, the Charleston Battery shutout Tampa Bay Rowdies 1-0 Friday night at Patriots Point. It marks the second time Tampa Bay has lost this season, both in Charleston.

The Battery had one of their best first half performances of the season with clean passing, multiple crosses and several near breakaways throughout the first 45’. The pressure Charleston applied early and often to the Tampa Bay defensive unit was only compounded as the Battery were awarded several set pieces with 6 corner kicks in the first half. In the 32nd minute, one such corner nearly put the Battery ahead as Robbie Crawford changed course and launched it out to Zeiko Lewis placed 20 yards out. The shot by Lewis was deflected in by AJ Paterson, but called back with the offsides flag. Last week against Miami FC, the Battery had zero corners. They ended Friday’s match with a generous 10.

Looking at the success of the first half, Coach Mike Anhaeuser noted, “well, you’re at home. I think a lot of it was Tampa Bay sat back, looked like they were going to play for 0-0 at the half. We did a great job moving the ball, using our strength on the outside of the field with AJ, Logan, Zeiko and Nico. We really pushed the ball on them [defenders] Jarad and Leland  really kept moving the ball and shifted it. It was a really good first half, just unfortunate we couldn’t get that end product.”

Tampa Bay came out for the second half looking refreshed and catching the Battery sluggish few opening minutes. The Rowdies had a chance in the 53rd minute with a free kick 20 yards out, but forward Leo Fernandes sailed it clear over the crossbar and into the supporters section.

It was just minutes later that Charleston struck. Charging downfield the ball was pushed up to Mauro Cichero 40 yards out. Cichero floated a brilliant pass splitting two defenders and finding Zeiko Lewis. With the clear gap in the back line and a quick pivot shaking the defense, Zeiko grounded one through and past keeper Evan Louro. The remaining 35 minutes saw the Battery limiting any rebutting chances by the Rowdies and after 4 minutes of stoppage time, Charleston secured 3 points.

“They’re tough to breakdown because they’re a good defensive team. But we really created a lot of chances and I think we played well,” Coach added, looking at the team’s performance against a 2-loss Rowdies squad.