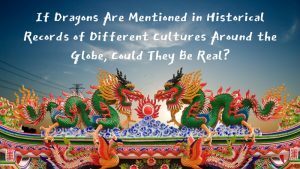 Dragons. Probably the most mythical of all mythical creatures mentioned in various countries around the globe. Stories about dragons spread to all inhabited continents, covering territories from Scandinavia on the north to the Cape of Good Hope on the south, as well as from the American continent on the west to Japan on the east. Through time, stories about dragons have become so popular that nowadays you can come across these magnificent, yet frightening creatures in various books, novels, comics, and even games, blockbuster movies and top TV shows, for instance, the famous “Game of Thrones.” Gamblers can find dragon themed games, such as Dragonship, Dragon Maiden, Golden Legend among different Play’n GO slots as well as in other developers` game portfolios. But not only that, dragons have been a subject of scientific studies as well, some of them led by the most renewed paleontologists of the world.

Although there are so many stories and conducted studies about dragons, their origin and history, one question still remains – are they real or just a myth? Was there a time in the evolution of the planet Earth when humans and dragons coexisted, or are they just a product of the endless fictional power of the human mind? We will let you come to your own conclusion by providing some of the facts and stories about these mythical creatures!

A Brief History of Dragons

The mere word “dragon,” which was accepted as a part of the English language back in the 13th century, originates either from the ancient Latin word “draco” or from the ancient Greek word “drákōn” both referring to a “giant serpent.” The Greek word could also be used for describing a “giant sea fish.” We can see that both of these ancient civilizations were using these words to describe a huge serpent-like creature, which does not have to be fictional, while such civilizations were never mentioning dragons as myths, but rather as real-life animals.

Although you probably think that stories about dragons originate from China, that’s partially true, while the debate is still on the point whether first traces were discovered there or in the West Asian region, which was a cradle of one of the oldest civilizations discovered so far – Mesopotamia. Dragons can be found in various Mesopotamian literature and artwork, although it is considered that this civilization never made contact with dinosaurs, for which some scientists believe were falsely interpreted as dragons by these ancient people. As for the Mesopotamian artwork, an illustrated draconic creature was discovered in various paintings and illustrations from both the Akkadian and Neo-Babylonian periods, which lasted from around 2300 years BC until around 550 years BC. One of the most popular interpretations of draconic creatures is definitely known by the name of “Mushkhushshu.” It is a scaled, serpentine monster with front lion-like legs, rear bird-like legs, and snake-like head, neck, body, and even tongue. It is painted on the famous Gate of Ishtar, the eight gate to Babylon, believed to be constructed around 575 BC.

Sumerian literature, which includes both traditional and religious stories, is the earliest form of recorder literature discovered so far. Sumerians are thought to be the inventors of the special cuneiform writing system, believed to be used around 3000 years BC. These stories were later accepted by the empires of Akkadia and Babylon and implemented in their culture and tradition.

Sumerian writings contain records about the creature known as Ushumgallu, and the greatest kings of the period were often compared to these powerful creatures. Ushumgallu is commonly described as a demon-like creature with characteristics of both a lion and a dragon, with four lion-like legs, but scaled, as well as with dragon-like wings.

Nowhere has the culture revolving around dragons grew its roots so deep as in the Far East, especially those territories inhabited by the Chinese and Japanese population. Dragons are so deeply imprinted in their culture and tradition that even today, these civilizations tend to praise these mighty creatures through various manifestations, such as the Spring festival or the Duanwu festival in China.

In China, the dragon is considered to be a top-ranking creature in the animal kingdom. It was often associated with many rulers and dynasties, such as the Lord Ye Gao. This particular ruler was so obsessed with these mighty creatures that he ordered his servants to decorate his home with draconic motifs. The most interesting thing about it is the fact that Lord Ye Gao has never seen a dragon in his life! However, after seeing such decoration, which represented a way of paying respect and admiration towards dragons, one of them decided to visit the Lord, who immediately ran away frightened by the dragon’s appearance! An even more powerful story revolves around two leaders of ancient pre-Chinese tribes – Yandi and Huangdi. Yandi was believed to be born as a result of a telepathic connection of his mother with a dragon. He later teamed up with Huangdi and created the ancestor civilization of the Chinese people of today. And this story probably confirms the strength of the connection between dragons and Chinese culture and tradition in the best possible way!

There are 9 types of dragons recognized by the Chinese people, and each of them is presented as an ornament on various items. For instance, the dragon named Quiniu, who enjoys music, can often be found on instruments.

In general, Chinese people don’t see dragons as evil creatures, but rather as benevolent and lucky ones, believed to have the power to summon the rain each time a drought comes.

In Japan, dragons are often associated with various things, and such stories are usually intertwined with those that originate from China, India, and Korea. Japanese dragon is a bit different when it comes to its appearance, while it carries no wings. They are usually depicted as giant serpent-like creatures with huge claws and are considered to be a kind of a water deity, with bodies made of water.

In Japan, dragons are also often associated with various rulers, which are depicted riding on the back of a dragon. Japanese people believe that metal has the power to kill a dragon, so sword manufacturers were racing to create such weapons. 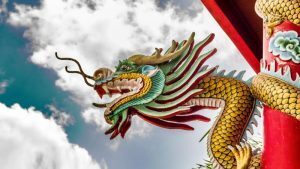 Nowadays, there are some species whose existence and origin still remain a mystery and the main point of discussion among many renewed scientists. Of course, don’t expect to come across giant serpents breathing fire, but among these species, there are some that are considered as pretty dangerous. So, here are some of the dragon-like species of today:

Komodo dragon is considered to be the largest living lizard, reaching up to 3m in length and 80kg in weight. Although they can’t breathe fire, they possess venomous saliva, as well as razor-sharp teeth capable of making devastating wounds that are then being infiltrated with saliva poison.

Dragonsnake can be seen in territories such as Indonesia, Malaysia, and Australia. It is equipped with solid, black, dragon-like scales, especially on the back. This unique fish species can reach up to a meter in length, and through genetic analysis, it has been concluded that it originates from primitive giant ocean snakes.

Bearded dragons are ubiquitous for central Australia. They possess extremely tough and sharp scales on their chin, which can change colour and even their size each time an animal gets into conflict. It is discovered that they have the ability to adapt the colour of the scales according to the circadian rhythm in order to absorb as much sun as possible to keep them warm during the night.

The flying dragon, also known as the Draco species, lives in the rainforests of SouthEast Asia. These animals, although tiny, probably remind of dragons the most. They have an elongated rib cage that allows specialized skin flaps called “patagia.” And not only that, but they also possess special muscles through which they totally control the patagia, deploying it when needed, and folding it next to the body when not needed. Such a mechanism allows these small creatures to glide through the air covering distances of up to 10m when crossing from one tree to another!

Black dragonfish simply looks like a monster from the movies! It possesses a long, black body, reaching up to several meters in length, oversized jaws with frightening sword-like, thin, but very sharp teeth, as well as a special body structure which can withhold extreme pressure, while they tend to live at depths of around 2000m.

Is It All Just a Human Mind?

There is an interesting theory postulated by a renewed scientist David E. Jones, which was also backed-up and presented in the “Maps of Meaning” by Jordan Peterson, considering the connection between primal human fears and dragons. The theory goes that there is a possibility that a dragon is an amalgam of three animal species: snakes, cats, and birds, of course, those predatory ones. Jones implies that we have maybe inherited fear of these predatory animals from the primates and that it is possible that these three were, at some point, mixed-up through stories and artwork to produce a picture of a dragon we know today.

Cannabis Can Help Stress — But Not How You Think

What Are the Benefits of CBD Oil? 9 Fantastic Uses of CB