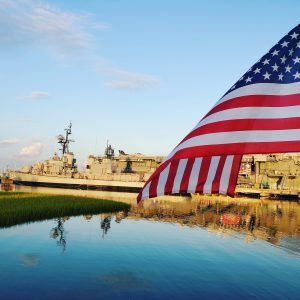 On September 11, 2020, the 9/11 Silent Walk will lead a livestreamed memorial service at Patriots Point Naval & Maritime Museum to honor the 2,977 victims killed in the terrorist attacks launched against the United States 19 years ago.  The live feed will stream on Patriots Point’s Facebook and YouTube pages.

At 8:46 a.m., the exact moment the first plane was flown into the North Tower, the North Charleston Fire Department Honor Guard will march down the pier and up to the flight deck of the USS Yorktown where they will briefly pause at 9:03 a.m. – the time the second plane struck the South Tower.  Following a moment of silence, the Guard will raise the NYPD and FDNY flags.

“For the last several years we have been honored to be part of the 9/11 Silent Walk to honor the victims of 9/11,” said Patriots Point Executive Director Larry Murray.  “Since we aren’t able to continue that tradition because of the risk to public health, we immediately started discussing alternative ways to properly honor the fallen.  We hope the community will take a few minutes to join us on Friday, a day we promised never to forget.”

Among the 2,977 people who lost their lives on September 11, 2001 were 343 members of the Fire Department of New York City and 71 law enforcement officers.

In addition to the streamed memorial service, Patriots Point Naval & Maritime Museum will share reflections and comments from public safety leaders in the Greater Charleston area.  Those scheduled to speak virtually include: