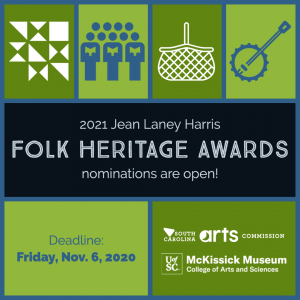 The South Carolina Arts Commission and McKissick Museum at the University of South Carolina want to honor exceptional practitioners and advocates working in the Palmetto State’s folklife and traditional arts.

Eligible artists and advocates fitting those descriptions can now be nominated for the Jean Laney Harris Folk Heritage Award. Created by the South Carolina General Assembly in 1987 to recognize lifetime achievement in the traditional arts, the Folk Heritage Award is presented annually by the General Assembly to honor the work of stewarding and furthering the traditional arts significant to communities throughout the state. The South Carolina Arts Commission and UofSC’s McKissick Museum jointly manage the awards.

Up to four artists and one advocate may receive awards each year. Nominations are accepted in two categories:

Before submitting a nomination, you are strongly advised to contact Program Specialist for Community Arts & Folklife Dr. Laura Marcus Green to determine whether your nominee is eligible: lgreen@arts.sc.gov or 803.734.8764. For program guidelines and nomination instructions for the Jean Laney Harris Folk Heritage Award, visit SouthCarolinaArts.com.