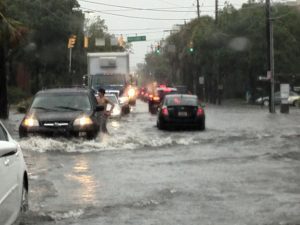 Charleston City officials today filed a lawsuit in South Carolina state court to hold fossil fuel companies accountable for the costs of adapting to the harmful impacts of climate change.

“As this lawsuit shows, these companies have known for more than 50 years that their products were going to cause the worst flooding the world has seen since Noah built the Ark,” Mayor John Tecklenburg said. “And instead of warning us, they covered up the truth and turned our flooding problems into their profits. That was wrong, and this lawsuit is all about holding them accountable for that multi-decade campaign of deception.”

“The City seeks to ensure that the parties who have profited from externalizing the consequences and costs of dealing with global warming and its physical, environmental, social, and economic consequences, bear the costs of those impacts on Charleston, rather than the City, taxpayers, residents, or broader segments of the public.”

“As the founder of an industrial lubricants business here in South Carolina in the 1970s, I handled their products, and I can tell you from firsthand experience that these companies were not in any way, shape or form sharing information with us about the dangerous flooding and extreme weather their products would cause,” Mayor Tecklenberg said. “In fact, I was hearing the same false and misleading claims from them as everyone else. And now it’s time for them to pay for the damage they’ve caused for our residents, businesses and taxpayers.”

The city says the lawsuit “details examples from defendants’ decades-long campaign to deceive the public, press, and policy makers about the harm the defendants knew would occur from the use of their products.” The complaint also details the resulting impacts that Charleston is currently enduring, including:

Charleston is the first city in the south, and the 21st community nationwide, to attempt to hold fossil fuel companies accountable for climate change deception, impacts, and costs.

Follow us
Related Topics:charleston floodingCity of Charlestonclimate change
Up Next