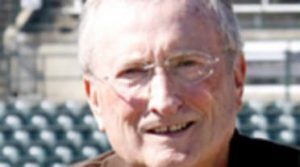 The Charleston RiverDogs today announced the passing of Dr. Gene A. Budig, 81, a part-owner of the team since January 2007. He is survived by his wife Gretchen, his sister, brother, his three children, and his five grandchildren.

“This is a truly sad day for the RiverDogs family,” Marv Goldklang, chairman and principal owner of the RiverDogs, said. “Gene was not only a partner, but a great friend. Gene and Gretchen have been a constant presence at the ballpark for the last 15 years, and Gene’s humor, sage advice, and pure love of baseball will be sorely missed. Our hearts go out to Gretchen and the Budig family.”

Gene and Gretchen moved to Isle of Palms in 2005 after Gene retired from an illustrious career in higher education and sports administration. Born in McCook, Nebraska, Gene’s career in academia was highlighted by his time as President of Illinois State University (1973-77), President of West Virginia University (1977-81), and Chancellor of the University of Kansas (1980-94).

In 1994, Gene was named the last president of baseball’s American League, a role in which he served for six seasons.

Gene retired in 1992 from the Air National Guard at the rank of Major General. A lecture hall at the University of Kansas, Budig Hall, is named in his honor. In recent years, he has also chaired the advisory committee for the New Era Pinstripe Bowl at Yankee Stadium.

Follow us
Related Topics:charleston riverdogsDr. Gene A. Budig
Up Next