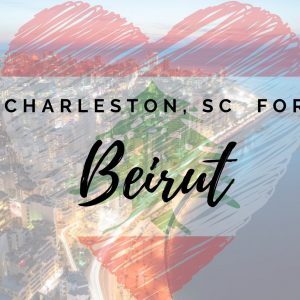 A local woman and some of her friends have created a series of fundraising events called “Charleston for Beirut,” which will raise relief funds for those affected by the explosion in Beirut, Lebanon on August 4th. This blast took the lives of more than 170, wounded over 6,000, and has left almost a third of a million people homeless.
Jen El-Haddad, who created the fundraising effort, said her family was directly affected and several family members are still hospitalized.
In the past month, they hosted a series of fundraising events, partnered with SOL Southwest Kitchen in Mt Pleasant and NOSH Cafe & Wine Bar in West Ashley, and put on three 45-minute workouts called “Be Fit for Beirut,” where almost 60 participants attended. They’ve raised almost $7,000 for relief funds in less than a month. The group’s upcoming events include partnerships with Palmetto Brewing Co. and Workshop. To see a list of upcoming events, visit the Charleston for Beirut Facebook or Instagram accounts.
All of the funds are supporting the Lebanese Red Cross and Live love: Rebuild Beirut, which is working to rebuild the destruction of all the homes affected. You can donate directing to Charleston for Beirut  on their GoFundMe page.

Follow us
Related Topics:Charleston for BeirutLebanese Red CrossLive love: Rebuild Beirut
Up Next