Slot machines are wildly popular for a number of reasons, and one of them is their provision of real money gambling. This service is available to players using a wide bet range from as little as a few pennies to hundreds of pounds per spin. High rollers who prefer to use big bets to cash in even bigger wins have a wide choice range to work with. Here are the most pricey slot games available to online players. 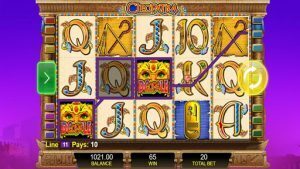 Numerous pokie collections have earned the software provider International Game Technology worldwide success, including the Cleopatra slots. These prominent IGT free slots have reigned supreme since the age of brick and mortar gambling, and their popularity drove the software developer to create an online version. The Cleopatra online slot was made available to online gamers in 2012. Ever since then, several sequels have been made of the original pokie, including:

The Cleopatra slots accept bets as high as 100 pounds per spin. The game awards as much as 10,000 coins for landing a combination of five Cleopatra symbols. In the Megajackpots version, punters can use the stake to have a go at a progressive pooled prize that often awards hundreds of thousands of pounds.

Red Tiger Gaming has been releasing slots for the online gambling community in 2020, and one of its recent releases is the 5 Families: Members Only slot game. The game fulfils any fantasies of being a gangster without getting caught in the crossfires of the dangerous lifestyle. The theme draws some inspiration from the Italian Mafia with Al Capone lookalike as the gang leader, and four godfathers surround him. The game’s appearance is pretty standard, with five reels with ten bet lines. Players can be part of the cigar-smoking notorious family for ten pennies to 500 pounds per round. The game can award up to 200 times the line bet along with several bonus features, the main ones being three jackpots that are as follows:

The chances of collecting any of these jackpots increase relatively with the stake size used. However, they remain as random to land as regular payouts and bonuses.

Age of the Gods 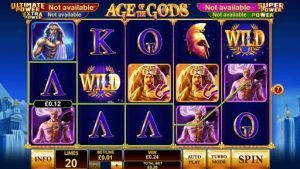 Age of the Gods is arguably the biggest slot collection online with about 20 titles under its banner. The slots got so popular that Playtech, the online gaming software provider behind their creation, released roulette variations. Age of the Gods slots focus on Norse and Greek legends in their themes, with some characters crossing over different pokies. The games’ popularity is driven by a range of factors, and one of them is wide bet rates that start as low as 20 pennies and can go as high as 500 pounds. Each pokie in this collection has unique bonuses crafted to suit their themes, but they revolve around wilds, scatters, multipliers, and free spins. Some of the most expensive Age of the Gods titles include:

The online gaming software developer Origins creates the Egyptian Emeralds slot game to circle the popular themes of Egypt and precious gems. The 5×3 playtable holds popular icons associated with the Egyptian culture, such as ancient gods, scarab beetles, ankh, ohm, and palm trees. However, they are all depicted as glowing gems with particular focus on the multicoloured scarab wild. Five of these icons award the highest win of twenty times the line bet. However, the maximum potential win is 200 times the total bet per spin, which can be as high as 500 pounds.

Aside from character wins, the game also offers a respins feature, which also activates with the appearance of the wild on the centre reel. The icon becomes stacked and triggers one respin that can grant a new set of stacked wilds. These symbols remain in place until the bonus comes to an end. 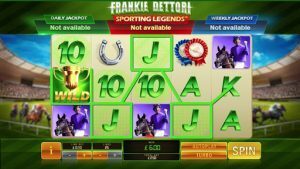 Frankie Dettori is another legendary slot provision by Playtech that focuses on the gambling needs of high rollers. The game is based on the famous horse racing legend of the same name, and players get to assess his skills on five reels and 25 play lines. The game aims higher than most, with a maximum bet limit of 625 pounds. Small spenders can also have a go at the game with as little as 10 pennies per round. Once the playtable is in motion, gamblers can land free spins, re-spins, scatters, wilds, and even a jackpot payout.

Hotline Slot prompts gamers to fasten their seatbelts and engage in a high-speed chase down Miami highways in the company of two skilled detectives. The game is no doubt inspired by the eighties’ smash TV series Miami Vice that lasted five glorious seasons. The heroes in the story, Rivera and Quinn, spring back to action with NetEnt’s Hotline slot game. The set was a success like the show it is based on, which saw the release of a sequel, Hotline 2. The small slot collection is accommodative of punters with expensive taste with bets of up to 450 pounds. With these stakes, the spins can generate wins as follows:

These amounts are multiplied by the line bet to come up with the wins. The combination payouts are accompanied by wilds that expand when they land on hotlines and free spins awarded by three scatters. 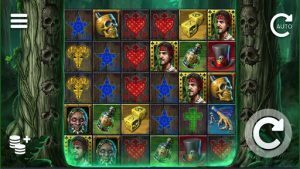 Voodoo Gold is part of the Gold slot series by Elk Studios that keep up with the adventures of Kane as he explores the magical swamplands of South America. The game charms big spenders with bets as high as 1000 pounds, which is much higher than even the average high roller pokie. The slot machine begins gameplay with a somewhat standard grid of six reels on five rows. With every consecutive win that is landed, an additional row is added to the top, and they can grow to as many as eight. A lot of more exciting features unfold during gameplay, including:

Genie Jackpots Slot is a classic release by Blueprint Gaming that is inspired by the famous tale of Aladdin and the Magic Lamp. Players are presented with a chance to meet the genie to grant several wishes for 20 pennies to 1000 pounds per spin. The highlight of the set is the Magic Carpet Bonus, which activates when two bonus symbols appear alongside a carpet icon. In the bonus, players are presented with numerous lamps that feature different credit wins of up to 1000 times the total stake. If the chosen lamp reveals COLLECT, the feature ends. Revealing BIG MONEY guarantees a massive payout.

Snow Wild and the 7 Features

Snow Wild and the 7 Wild Features is a clever slot twist by Red Tiger Gaming of the famous fairy tale Snow White and the Seven Dwarfs. Players can meet the punk version of the Disney princess with wagers as little as 20 pennies to as much as 500 pounds. As suggested by the title, Snow White plays the wild while each of the seven dwarfs has a lucky feature of his own, including wilds, instant wins, respins, bigger payouts, and tumbling reels. 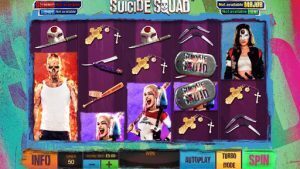 Ash Gaming takes notes from other successful software developers to create a slot machine based on a popular film. The Suicide Squad slot reintroduces players to some of the hardest criminals that are banded together to fight a force of ancient evil. The five by three slot offers as much action as the film for stakes as high as 500 pounds per round. The gameplay includes ordinary features like wilds and free spins, which are topped with four progressive jackpot features dubbed Mini, Minor, Major, and Grand. Any of these pooled prizes can be awarded in the Super Heroes Jackpot Game.

A lot more slots can be accessed online for bets as high as 1000 pounds per spin, most of which fall in the video slots category. Explore different slot choices for free to assess the bet limits before engaging in real money gameplay.

How to install metal roofing: DIY risks vs proficiency of experts

7 of the Most Effective Marketing Strategies for Small Businesses