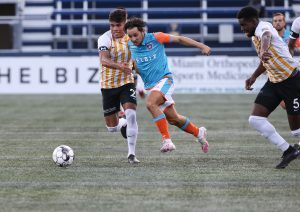 Through a hard-fought 90 minutes, the Charleston Battery secured another point in a 1-1 draw with The Miami FC Saturday night. It marked the seventh consecutive match without a loss for the Battery. While the Battery were looking for 3 points on a win in their second bout against the Miami side, a late deflecting goal in the 85th minute by Miami meant Charleston would have to settle for the draw.

Whether it was the south Florida heat or the first time playing on artificial turf this season, it took much of the first half for the Battery to find their footing again in the first match on the road since August 19th. The Miami FC put pressure on early, showing an energy on the attack unremiscent to the last time these teams played. As early as the 4’ minute mark, Miami nearly scored, but a deflected shot off Battery keeper Joe Kuzminsky allowed defender Leland Archer to kick it away for safety. The Miami side nearly struck twice through the first 45’ as Romario Williams put a shot off a left cross past Kuzminsky into the net but was called back for offsides. Williams almost struck again six minutes later as he took a pass past the Battery back line but shot just over the right corner of the net. While the Battery struggled to put something together in the attacking zone, a brief scare came when Romario Piggot went down, but Stavros Zarokostas came on as Coach Mike Anhaeuser’s first sub for the evening which proved to be a fortuitous change come the second half. For the Battery through the first 45’, the highlight of the night was Joe Kuzminsky’s battling at the goal line with multiple punches and blocks that kept Charleston in the game.

After the intermission, the Battery came out strong with an attack that had been absent the prior half. From the back line connecting up to the midfield, the Battery saw many opportunities created and finally converted in the 49th minute. In the right corner, defender Logan Gdula had pushed up and crossed to Zeiko Lewis in the box. The double teamed Lewis dished it off to Angelo Kelly who quickly deflected to Zarokostas. With a quick reset to setup the shot, Zarokostas sailed a beater from the top of the box over the reach of Miami’s keeper for his third goal on the season. After going up 1-0, the Battery went into defensive mode for the next 15 minutes to stave off the Miami attack and secure the win. Miami, however, continued to pressure the Charleston defense and were able to break through with the equalizer in the 85th minute off a from Miguel Gonzales. After an additional 4 minutes of stoppage time, the Battery had to settle for the draw and a solid point for the evening.

With the single point from Saturday’s result, the Battery now sit 3 points behind first-place Tampa Bay in the Group H standings. Charleston hosts Tampa Bay next Friday, September 11, back at Patriots Points as the club welcomes an increased number of fans back to the stadium.