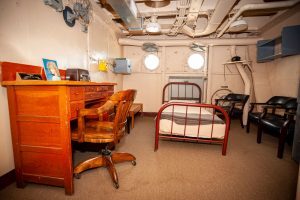 Beginning Labor Day weekend (September 4, 2020), Patriots Point Naval & Maritime Museum has partnered with Bulldog Tours to offer a new guided tour aboard the historic aircraft carrier USS Yorktown. The new tour entitled “Captain’s Tour: Exclusive Access and Insights to the Ship and Crew” will lead visitors to areas of the ship that have been off-tour for more than a decade.

In addition to the Flight and Hangar Decks, tour-goers will have the exclusive ability to climb aboard a recently restored B-25 plane, see the Yorktown’s fo’c’sle (anchor room), and step into the Captain’s Quarters.

Building on the success that Bulldog Tours and Patriots Point have experienced with the nighttime ghost tours aboard the aircraft carrier which launched in April 2019, the team worked to extend the partnership to include a daytime history tour option.

“Bulldog Tours is the best when it comes to creating a memorable tour experience,” said Patriots Point Naval & Maritime Museum Executive Director Larry Murray. “The ghost tours have been extremely popular because they include stories along with the facts.  That’s what this new day-time offering will also include – a first-rate, exclusive experience for visitors who are interested in aircraft carrier operations.”

The Captain’s Tour is a new reason for families to come back to visit Patriots Point. The public has never had access inside the museum’s B-25 Mitchell Bomber.  For more than two decades, the plane was suspended in the air so that visitors could only view it from the deck. In 2019, the aircraft was completely restored to resemble the planes used in the 1942 raid on Japan.  The raid was a response to the attack on Pearl Harbor, and is known as the Doolittle Raid.

“The stories of heroism and bravery that are associated with the raid and this plane are a privilege to share,” said Bulldog Tours owner John LaVerne.  “The Yorktown has a great deal to teach South Carolina’s residents and visitors alike.  It’s an honor for Bulldog Tours to bring the ship to life in this way.”

Patriots Point Naval & Maritime Museum is open every day from 9 am to 6:30 pm. Guided tours of the USS Yorktown are Friday through Sunday at 10 a.m. and noon.  The combined cost of the tours and admission is $39 for adults, $29 children, seniors $34.  For military veterans and active duty, teachers, and first responders the tour is $36.  Advanced tickets are available at BulldogTours.com and walk-up tickets are available at the museum ticket window.