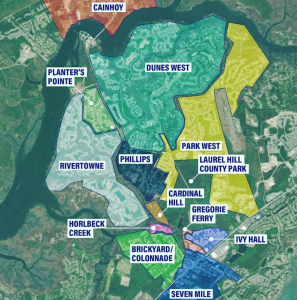 The Coastal Conservation League and Charleston Moves last week announced their opposition to one of the county’s options for the Highway 41 Corridor Improvements project. The organizations oppose “Alternative 1,” which the county has indicated is their preferred option.


Through the National Environmental Policy Act (NEPA) review process, Charleston County said Alternative 1 has been identified as the proposed alternative to reduce congestion within the corridor and accommodate future traffic projections. The issue? According to the Coastal Conservation League and Charleston Moves, Alternative 1 would widen Highway 41 through the center of the Phillips Community, a historic, African American settlement community established by formerly enslaved people in the 1870s. Many of the descendants of those original settlers still live on the same pieces of land their ancestors bought as free citizens of the United States.

After reading what each organization had to say about the project, and looking into it myself, Holy City Sinner agrees with their stance and joins them in asking the Charleston County Council to oppose “Alternative 1” and protect the Phillips Community. I encourage you all to do the same by signing the Coastal Conservation League’s petition here.