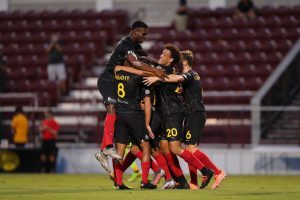 After three straight matches of aggressive attack for the Charleston, it was the defensive unit’s time to shine as the Battery defeated Tampa Bay Rowdies 1-0 Saturday night at Patriots Point. This marks the 4th victory in a row for the Black and Yellow carried the Battery undefeated for the month of August, having not lost a match since July 31st (away against Tampa Bay).

Five minutes into the first half and the Battery looked like an entirely different team than the one that came out at Al Lang Stadium the last time they faced Tampa Bay. After the player-led stoppage in play from the 7th minute through to 8:46’, the Battery created a few chances with shots by Angelo Kelly and Zeiko Lewis. As both teams battled back and forth through 20’, it was the Battery that looked most likely to break through. And in the 22nd minute, a midfield floater from Angelo Kelly dropped well-placed between two Rowdies’ defenders to allow Zarokostas to pull ahead, cut back around and rip a curl to the top right corner, bouncing off the right post and into the net. It was Stavros’ second goal for the year. Zarokostas nearly created a second goal-scoring opportunity after getting crowded in the box in the 38th minute, passing back to Kelly who crossed to Lewis. Lewis ripped a shot just wide left of the goal.

The Tampa Bay side came out strong in the second half keeping pressure on the Battery midfield and backs as they found plenty of opportunities for crosses back and forth over the middle in the 54th minute and the Battery getting lucky as Tampa Bays shot hit the left-outside of the net. While Tampa Bay maintained the advantage of possession through the second half, the Battery’s stout defense never let up, allowing just one Rowdies’ shot on goal which was scooped up in a brilliant save by Charleston keeper Joe Kuzminsky. Through the final 10 minutes and an extra 5 minutes of stoppage time, it was all the Battery backline. When Zarokostas cramped up in the 88th minute, Kyle Nelson came on to secure the back line with 5 defenders, all who found ways to punch the ball down field and eat up the clock for full time and a fourth win in a row.

“They never really got in except for a couple chances,” Coach Mike Anhaeuser commented on the Tampa Bay attack. “Jarad and Leland have been so strong in the middle, but you have to give the whole team credit for defending as a unit.”
With the tightening at the top of the Group H standings and the road ahead, Coach added, “We know that every games tough. We play Tampa Bay again 2 more times, we play Miami 3 times. They’re good teams. We’ve got to come every week and bring our A games. And on the road, where we’re going next week, we’ve got to sharpen up even more.”