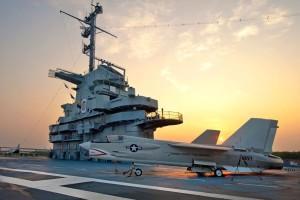 Patriots Point Naval & Maritime Museum this week shared that the Hallmark Channel will be filming a holiday movie aboard the USS Yorktown this fall.


The museum shared the news Thursday on their Twitter account. They said a production crew visited the property this past week.

The Hallmark Channel is known for their “Countdown to Christmas” programming, which runs from the last weekend in October until January 1. During this time, the network shows a mix of holiday movies, specials, and more.

The Yorktown is no stranger to appearing on television or the big screen. The ship has been featured in some capacity in the following shows and films: the 1944 Academy Award winning documentary The Fighting Lady, an episode of Get  Smart (1968), Tora Tora Tora (1970), Showtime’s Homeland (2012), Ghost Hunters (2018), and more.

Hallmark Christmas Movie Alert! Hallmark will film one of their famous holiday pictures aboard our USS Yorktown this fall. Pictured here is the production crew during their visit this week. The question now @hallmarkchannel, will they kiss at the end?? pic.twitter.com/muVLgfq4Li