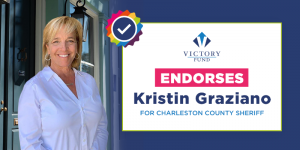 The endorsement comes one day after the political action committee of SC Equality, the statewide organization dedicated to LGBTQ equality in South Carolina, also endorsed Graziano.

The Victory Fund added, “LGBTQ people remain severely underrepresented in government nationwide – holding just 0.15 percent of elected positions despite representing at least 4.5 percent of the U.S. population, according to Gallup. As an openly LGBTQ leader, Graziano will be an unwavering voice for equality in Charleston County. Her priorities in office will include implementing independent audits of the department’s policing practices and finances, creating a community task force to provide oversight, and reforming the juvenile justice system.”

You can learn more about Kristin Graziano at kristinforsheriff2020.com.

You can learn more about the LGBTQ Victory Fund at victoryfund.org.

SCDP Statement on Sen. Graham’s Comments on the Shooting of Jacob Blake