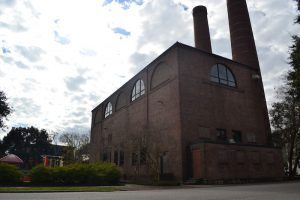 The following is a press release from the City of Charleston:

The city had been working closely with Bennett Preservation Engineering to find ways to stabilize the chimneys. However, “[a]fter evaluating multiple approaches to saving the structures, we had come to the conclusion that they could not reasonably be made safe at their present height,” Mr. Bennett wrote.

Citing 32 structures in the surrounding neighborhood that are at risk of potential damage in the event of a collapse, he continued, “Unfortunately, we are rapidly approaching the worst of the hurricane season here in Charleston, the time that puts the residents of that area at greatest risk. . . . We have to recommend, in the interest of public safety, that these chimneys both be disassembled to the ground (or effectively so) and that it be done in a way that will protect those in that immediate area throughout the process.”

Mr. Granata said, “Based on the engineers’ findings and conclusions regarding the current condition of the two smoke stacks, it is apparent that both structures require immediate and complete disassembly in order to protect the safety and wellbeing of nearby City residents and the general public.”

The city of Charleston Parks Department is in the process of obtaining the necessary permits and hiring a contractor for demolition of the chimneys and will begin work as soon as they are obtained.

Follow us
Related Topics:City of CharlestonSt. Julian Devine Community Center
Up Next

Local Organizations Announced Launch of the Stamp Out Hate Campaign

SCDP Statement on Sen. Graham’s Comments on the Shooting of Jacob Blake