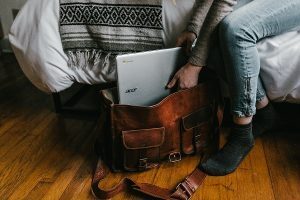 There are around 25 million students across the globe using Chromebooks at school,  according to research by Android Central. This laptop computer, used to access study material and complete projects and assignments, is considered a safe way for schools to control  how students share information, yet recent events at a Berkeley County school has revealed that bullying, sexting, and other potentially harmful behaviors for teens are still occurring via Chromebook use.
Google Docs For Sharing Information
Chromebooks allow administrators to control actions such as sharing documents, uploading images, and using forbidden sites. However, one tool that some students in the above-mentioned school were using to share suicidal thoughts or to bully or send sexting texts, was Google docs – Google’s online program that is used by students to work together on documents and projects.  The Post and Courier reports that administrators have discovered docs with suicidal writings and threats. Following discovery, law enforcement has been sent to children’s homes for welfare checks, and other protective measures have been established at school.
The Downside Of Google Docs
In lieu of standard social media sites, students are turning to Google docs  to create ‘live chat rooms’. The advantage these documents have from a secrecy point of view is that any text or message placed into the doc can simply be erased in real time. This can be an obstacle for students wishing to bring their case to a  bullying attorney or those wishing to put an end to harmful behavior. Bullying is difficult to prove in the absence of written or recorded texts. The Berkeley County school found that most troublesome behavior was actually occurring outside class hours, though – meaning that students do have extra buffers when it comes to protecting themselves. For instance, they can record abusive writing by other means (for instance, via smartphone) or show parents signs of abuse in real time.
What Is The Solution?
In this digital age, Chromebooks are a useful tool for reading, sharing information, and working on group projects. However, shared documents have the potential to be a forum for damaging behavior (including bullying), with perpetrators attracted by the ability to remove offending items in real time. Administrators need to work on educating students on how to report and capture offending items. For instance, if they encounter this type of text at school, they can take a screenshot before the text vanishes. At home, as mentioned above, they can use screenshots or record text and imagery as it arises and is deleted before their eyes.
In the digital age, cyberbullying and other means of online abuse are taking a different form. Google Chromebooks are used by millions of students as a convenient way to access a host of information without having to carry heavy printed books around. However, features such as Google docs enable students to engage in live chats that have the potential to harm their mental health. Therefore, administrators, parents and teachers alike should work together to foster safe practices and to establish protocols for recording harmful material.

A Guide to Find the Best Online Casino to Gamble