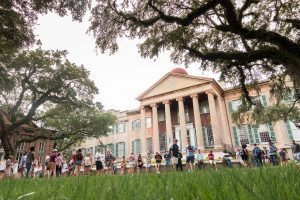 The dawn of a new academic year at the College of Charleston brings with it a new class of students to join the Cougars’ ranks. And the members of the Class of 2024 come from across the country and around the globe, bringing with them new perspectives, energy and ideas that are sure to add to the tapestry of the Cougar Nation.

Get to know the Class of 2024 with these facts and figures:

* This information is provisional and should not be considered official data.
–