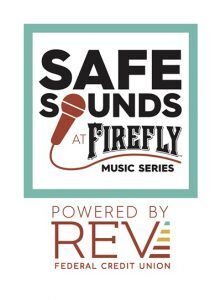 Firefly Distillery, South Carolina’s oldest working distillery, announced the second installment of its socially distant concert series, Safe Sounds at Firefly, being held in partnership with Ear For Music and Charleston City Paper.
The fall Safe Sounds series will kick off on September 5th and run for nine consecutive Saturday nights through October 31st. In addition, a special Friday concert on October 2nd will feature the GRAMMY award-winning Del McCoury Band. Attendees can enjoy live music, refreshments, and food truck fare from the expansive fields of the new Firefly Distillery in Park Circle (4201 Spruill Avenue), allowing for safe social distancing.
“When we launched Safe Sounds this summer, we wanted to provide a place where locals could get their live music fix safely,” Scott Newitt, co-owner of Firefly Distillery, said. “Our new location in Park Circle allows us the opportunity to get creative with events in our new socially distanced world. After the inaugural concerts were so well received, we decided to bring the series back this fall with more bands and bigger acts. We look forward to hosting attendees again at Firefly Distillery responsibly.”
Limiting capacity to 10 percent, 125 VIP “Safe Sounds Squares” are available for each concert, which secures four guests a ten by ten footprint on the field, separated on all sides by 8-feet. Single back lawn tickets are also available.
Each concert will run from 6 pm to 10 pm, with doors opening at 5 pm, and will feature live music performances, Firefly cocktails (served until 7 pm), beer, wine, and local food trucks. Charleston’s popular DJ Natty Heavy will emcee the series and spin during set breaks.

Tickets can be purchased in advance at citypapertickets.com. Attendees are encouraged to bring blankets and chairs to enjoy the concert. Dogs, children and outside food are not permitted.
The distillery says they are meeting and exceeding the CDC and WHO’s recommendations not only for formulating its own hand sanitizer, but also social distancing measures. They are taking extra precautions to keep the community healthy by:
For more information about Firefly Distillery, safety procedures and the concert series, visit www.fireflydistillery.com.