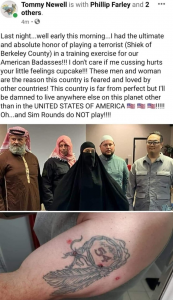 The Council on American-Islamic Relations (CAIR), the nation’s largest Muslim civil rights and advocacy organization, today called for an investigation into the circumstances surrounding a photo posted by Berkeley County Councilman Tommy Newell showing himself and others “playing a terrorist” for a training exercise by dressing in traditional Middle Eastern and Islamic attire (right).

Newell posted the now-deleted (or hidden) photo of himself as the “Shiek of Berkeley County” [sic] on Facebook. The photo included people wearing a traditional Arab “kaffiyeh” head scarf, as well as an Islamic “kufi” (skullcap) and “niqab” (face veil).

“By associating ordinary Middle Eastern and Islamic attire with terrorism, Councilman Newell and the organizers of the training exercise are placing local Muslim families in danger of stereotyping and bias,” said CAIR National Communications Director Ibrahim Hooper. “We urge county officials to investigate this incident and to repudiate the type of xenophobia and Islamophobia it represents.”

How Businesses Can Benefit from Using Social Media Sites